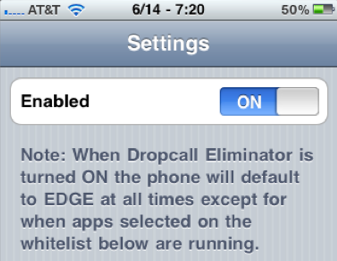 While most of its bad publicity has faded into the background, dropped calls are still an issue for AT&T customers (and all carriers) in certain areas. To remedy this problem, many AT&T customers have been directed to switch to the EDGE network when making phone calls.

Apparently, many dropped calls from AT&T iPhone handsets are caused by a 3G data conflict. The iPhone doesn’t seem to experience that issue on EDGE networks. But wouldn’t it be cumbersome to switch back and forth between EDGE and 3G all the time? Yes. But that’s why we jailbreak. Meet DropCall Eliminator…

This new jailbreak utility routes all of your calls to the more stable EDGE network. You can also set per-app networking preferences, in case there are other apps you use that don’t require 3G service.

Once enabled, DropCall Eliminator switches your iPhone over to AT&T’s EDGE network. The White List feature allows you to select which apps you want to run on 3G, so you don’t sacrifice performance. The bottom line is you can be on the phone using EDGE, while downloading an app on 3G. Make sense? 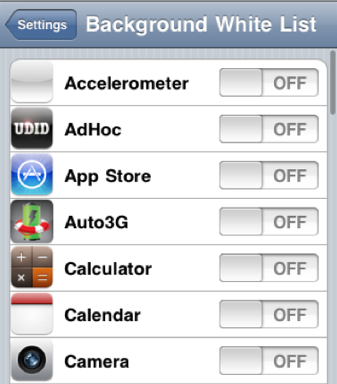 The developer notes that you must be in an area where both 2G (EDGE) and 3G coverage is available. He also warns there a slight delay when switching between networks, as the phone has to re-register itself each time.

Does DropCall Eliminator live up to its name? We don’t know. We currently aren’t in a poor enough coverage area to really test it out in. But if you’re constantly experiencing dropped calls, it’s certainly worth trying- even with it’s $4.99 price tag. DropCall Eliminator is available in Cydia.

Have you tried DropCall Eliminator? Thoughts?