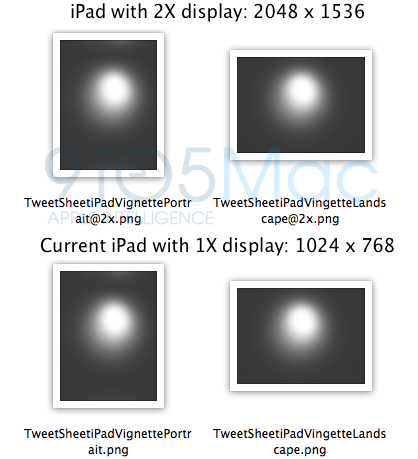 After doing some sleuthing in the iOS 5 beta SDK, the folks at 9to5Mac have discovered graphics for the next generation iPad that are 2X the size of the iPad’s current, 1024 x 768 resolution. These graphics are capable of fulfilling the requirement for Apple’s ‘Retina Display‘ that is currently used on the iPhone 4 and fourth generation iPod touch.

It was originally dismissed when 2X iPad graphics were discovered in the iOS 4 SDK, but 9to5Mac believes that this Retina Display-worthy resolution references the iPad 3’s screen.

“Today, we have iPad 2X graphics found in the Twitter frameworks portion of the iOS 5 SDK. These graphics were quickly dismissed by some as another Apple graphic designer thinking ahead due to rumors, but we think the opposite. See, iOS 5.0 is the first SDK to even support the 3rd generation iPad, as previously revealed, so it would make sense that some iPad 3 strings would be present.”

Several other pieces of evidence, including 2X graphics found in the iBooks app and the iOS 5 Newsstand app, reference a doubled resolution for the next generation iPad. 9to5Mac feels strongly that Apple is planning a 2048 x 1536 resolution for the iPad 3.

“Due the circumstances in which these new iPad 2X graphics were found, we feel that these icons are not just a coincidence or a designer thinking ahead, but rather a strong indication that the next iPad will feature a 2048 x 1536 Retina Display.”

What do you think? A Retina Display on the iPad would certainly be welcomed. Let’s just hope that Apple can keep the same, competitive price point.