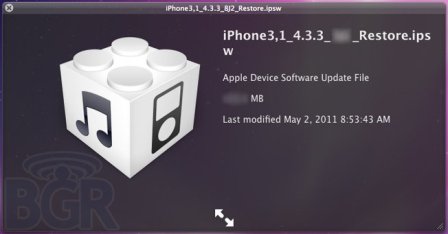 If you’ve been living in a cave the last few weeks, you may have missed all of the controversy involving Apple’s iOS. A research team uncovered a hidden file deep within Apple’s mobile operating system, that kept a record of users’ travels. When they broke this information to the public, a lot of curious folks turned to Apple for answers.

The secret file was just a programming glitch, but the public has a tendency to be really concerned about their personal privacy. In the wake of the discovery, Apple decided to patch the bug in a new firmware update, which just went live a few minutes ago.

Original iPad owners who are jailbroken and iPad 2 owners that hope to jailbreak in the future should avoid upgrading to the new firmware. As with any new software update, Apple could have patched the exploit that the current jailbreak is using, and you could be stuck with stock iOS for a while.

Although a jailbreak for the iPad 2 has not been released yet, owners of Apple’s latest tablet are encouraged to stay away from the new software as well.  There are members of the Chronic Dev team and others that currently have jailbroken iPad 2s, the exploit is just not ready for the masses. Updating your firmware could disqualify you from the possibility of a future jailbreak.

iOS 4.3.3 was specifically released to erase the file that was recording locations. While I don’t think we’ll see any surprises in this update, I would still recommend holding off until we have official word from the community that it’s safe. We’ll keep you updated.

Are you more worried about Apple’s location bug or your jailbreak?