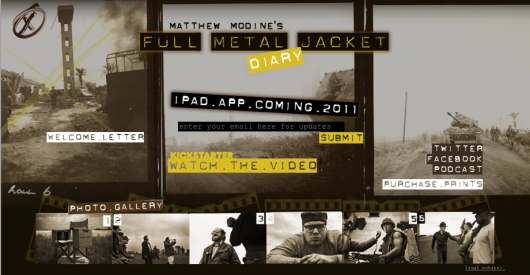 Most everybody recognizes the movie Full Metal Jacket, or at least recognizes the name. The 1980’s film based on the Vietnam War was instantly a classic, not only because of its epic storyline, but because of director Stanley Kubrick.

The experience was so amazing, that star Matthew Modine decided to keep a journal of his experiences on the set. This diary later turned into a book, which included on set photographs and personal accounts of working with the legendary director.

The limited edition book sold out quickly, and fans have continued to hope that a paperback edition would soon make its way to the shelves. Although Modine doesn’t plan to publish any more copies of the diary, he might be looking to bring the book to life with a new iPad app.

Adam Rackoff is a huge Kubrick fan, and loves Full Metal Jacket. He also loved Modine’s book enough that he approached the retired actor last year about his idea for an interactive iPad app that told the behind the scenes story of Full Metal Jacket. The app would feature audio of Modine reading his journal, and a wealth of scanned original photographs from the movie.

Although they’ve done a lot of work on the application, they’ve reached a halt in production. Lack of funds has forced the producer to launch a Kickstarter page to raise money for this hefty project. Rackoff currently has 80 backers that have pledged $6,601 so far. His goal is $20,000.

If you would like to see this app available in the App Store one day, pop over to the page and donate. You can pledge anything from $5 to $10,000 or more. The higher the donation, the cooler gift you get from Rackoff including authentic photographs from the set of the movie.