If you missed out on the Sony vs. GeoHot saga, let me quickly fill you in. GeoHot (real name George Hotz) was one of the first people to jailbreak the iPhone years ago. He’s been in and out of the jailbreak scene since then, but had recently turned his attention to Sony’s PS3.

After hacking the console, GeoHot released the code to the internet. Sony caught wind of this and took the infamous computer wiz to court. Hotz hopped online and asked for donations to help him in litigation, and received overwhelming support. He told supporters that he had received more than enough help to survive the first round of legal fees…

After what seemed to be a short court battle, a surprise out-of-court settlement brought the entire fight to an uneventful halt. This prompted a lot of questions from the supporting public. Why did he settle so quickly after all the aggressive comments he made like, “Help me own Sony in court.”

What seemed to irk people the most were the donations he received. What was he going to do with all of this left over money that was donated to him to support his fight against Sony? Would it be right of him to keep it? Many readers recommended that he give the money to charity.

Well apparently he was thinking the same thing. Yesterday, GeoHot posted on his blog that as promised, he gave the leftover donation money to the Electronic Frontier Foundation. He even posted this screenshot of the PayPal transaction for the $10,000.00 contribution. 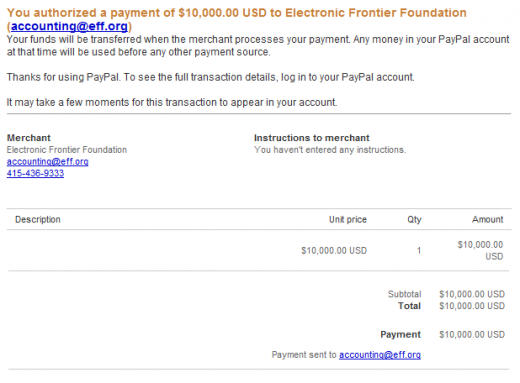 He notes that he is donating the left over donations (plus a little extra from his own pockets) to the EFF in hopes that one day America can be a shining sample of freedom. When asked if he would continue to work on Sony products he replied, “Nah, as much as I don’t respect the goons at Sony, I do respect the court.“

What do you think? Is everyone finally satisfied with the outcome of this whole thing?