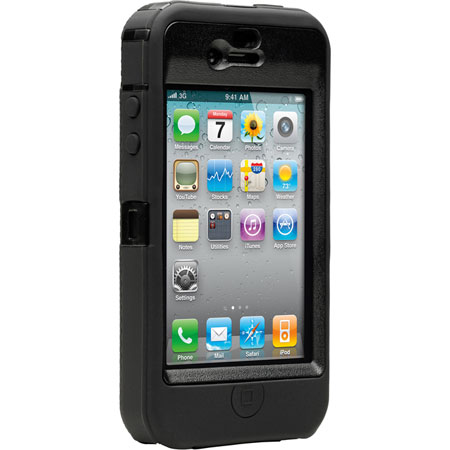 This is a guest post by my friend Guy, who’s owned more iPhones and cases than anyone I know. Because Guy is a heavy (and very picky) case user, I figured he would be the best person to review the OtterBox iPhone 4 Defender Series Case.

I have had more iPhones than I can count since my first $600 2G back in 2007. Of those, I’ve broken the glass on a half-dozen or so. Such was the case with my last iPhone which I broke last week. At the time, I was using the OtterBox Commuter. While it was pretty effective at absorbing most of the shocks caused by dropping it – even on concrete – it didn’t do a thing to protect the screen when it fell and landed face down on a small rock…

But this new case has it completely covered. Until Apple makes a phone the equivalent of Panasonic’s ToughBook laptop, the Defender Series Case is as good as it gets. Just as you’d expect, there’s a little trade-off with bulkiness but it’s totally manageable.

There’s a rigid two piece plastic frame with a clear screen that’s actually easier to keep clean than the glass. It fits very tight against the glass too, and there’s no loss of sensitivity that I can find. Over that is a rubber cover that slips on. It’s got a non-slip quality to it that keeps the phone from sliding off of most surfaces.

I’ll admit, I had to read the directions to take it apart the first time, and even now it takes about 10 seconds to disassemble, but it’s really not hard to do. A really A+ design.

Got a GSM or CDMA iPhone? No problem. The new OtterBox Defender Series Case has been designed to be compatible with both models.

At $49.95, the Defender Case doesn’t come cheap, but really, how much is protecting your iPhone worth to you?

Overall, if you just need to protect against the “death grip“, a case like the OtterBox Commuter Series will do the job. If like me you’re always on the go and prone to dropping your phone and want to protect your investment, this is the only one to buy. Everything else is a waste of money.

Interested in the Defender Case? Click here to purchase it, and enter coupon code iDB201103A (case sensitive) to get 10% off your order.