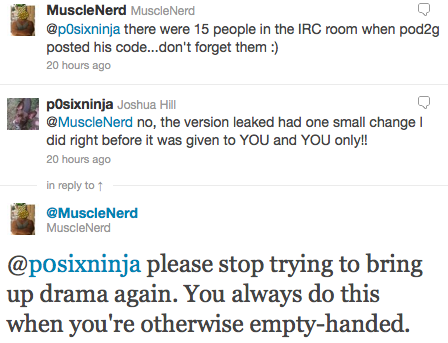 Looking at the drama going on between MuscleNerd and P0sixNinja on Twitter, I feel like I am watching a full season of the Young and the Restless. Quick heads up for those of you who didn’t follow the whole conversation.

A few months ago, hacker pod2g found a bootrom exploit in iOS 4.0.1 which was quickly named SHAtter. Chronic Dev Team later started using SHAtter for their GreenPois0n jailbreak for iOS 4.1. Then GeoHot came in the game with a new exploit that he was going to use no matter what in his LimeRa1n jailbreak. At this time, Chronic Dev didn’t have a choice but to put SHAtter on the side for later, and use GeoHot’s exploit.

Why is it important?

It is important because SHAtter likely is the only bootrom exploit the Dev Team (or other iPhone hackers) can use at this time to create a future jailbreak tool. If the source of this exploit is leaked and Apple gets his hands on it, the firm will definitely patch it in a future iOS update.

In the meanwhile hackers like MuscleNerd who focus most of their work on the iPhone unlock really need the exploit, which is the base of all their research. If SHAtter goes to trash, weeks of work go to trash as well.

I guess we’ll never find out who leaked the SHAtter exploit. P0sixninja accuses MuscleNerd. MuscleNerd accuses P0sixninja. This is going absolutely nowhere. However, the question that comes to mind is why would MuscleNerd leak something he relies on for his work on the unlock?

Well folks, let’s just hope that the “real” SHAtter as Comex calls it hasn’t really been leaked or if it has, that it hasn’t made its way back to Cupertino. If it has, that means that the Dev Team or someone else will have to figure out a new exploit when iOS 4.3 comes out, which ultimately means we’ll have to wait longer for a 4.3 jailbreak.

What do you think about this whole situation?