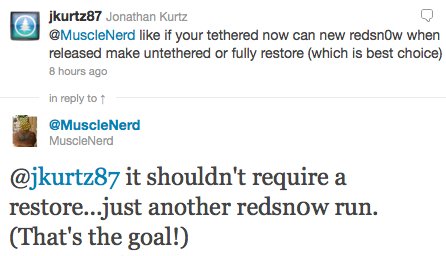 If you decided to update to iOS 4.2.1 and jailbreak using RedSn0w, you most likely have a tethered jailbreak, which requires you to plug your iPhone in and kickstart it with RedSn0w every time you reboot. Very inconvenient.

We’ve had words for a while that the Dev Team was working on an untethered jailbreak, which MuscleNerd confirmed would be available before Christmas.

Today, the Dev Team’s frontman gave us more information about this untethered jailbreak via a tweet in reply to someone asking if we’ll have to fully restore the iPhone and run RedSn0w again in order to benefit from all the untethered goodness…

According to MuscleNerd, the process shouldn’t require a restore. You’ll most likely have to run RedSn0w on top of your current install and it should take care of it for you. That’s pretty good news. A restore can be a painful process, especially if you have lots of jailbreak apps and themes to reinstall.

I bet many of you are waiting for this untethered jailbreak, am I wrong?