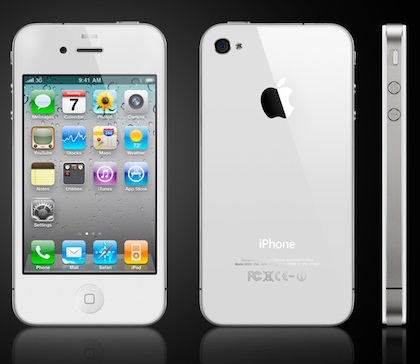 It appears, according to several other gadget blogs, that the black version of the new iPhone will be the only one available on launch day.

The white version will not be offered for another several weeks. In fact macrumors has confirmed that Deutsch Telecom, a German wireless company, will only be carrying the black iPhone as well on launch day.

What does this mean? Well, for a lot people, myself included, this means we might not be participating in the launch day madness if the white iPhone will not be available. Ever since I saw the white iPhone 3G I have been saying to myself that the next iPhone I get will be white!

Now it’s not that I’m discriminating against black phones, my current iPhone 3G is black. I think I like the white one because it looks and feels more exclusive, less common than the black one, thus making me look cooler right?

Hah, truth be told I buy Apple products not for the status but because they make everything I like doing easier. In fact, in a few weeks I will be setting up a small media network with airport express’, possibly a Mac Mini, in my apartment. I’ll keep you posted and will probably detail my experience in an article.

But the real question here is, do I want to join in on the launch day activities and head down to the Apple Store, and be cheered for as I purchase the black iPhone 4? Or do I want to wait weeks, read other hands on reviews with jealousy while I wait for a white iPhone announcement? What are you guys planning to do?