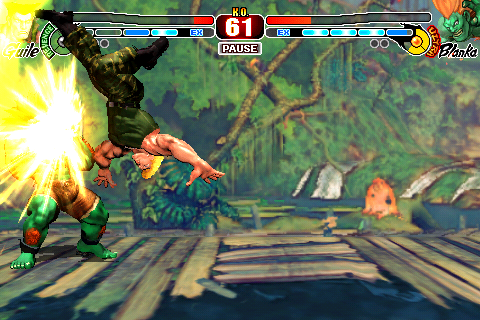 If you are in your 30s, you may remember the popular arcade game “Street Fighter II.”  I remember literally watching hours of people playing the game. (I rarely played the game; I mostly sucked but I wanted to save money). And now, you can get the latest version of the game right on your iPhone with Street Fighter IV [iTunes link] for $9.99.

Immediately, hardcore SF fans will see that there are only eight characters to choose from.  In the normal SF IV game, there is a total of 19 playable characters.  SF IV Producer Takeshi Tazuka says there are less characters because of the limited amount of CPU memory in the iPhone, 256MB of RAM for the 3GS and 128MB for the 3G.

Otherwise, this game really kicks (no pun intended).  As far as onscreen controls go, this is one of the better ones.  If you didn’t like touch controls before, this will not change your mind but it is more than adequate.  Here’s a list of buttons: punch, kick, special attack and focus attack.  The touch joystick is on the left.  These are transparent on the screen and do cover up the players a little, but it hasn’t affected my enjoyment of the game.

I have a 3G and the game is so memory-intensive that I do experience crashes.  3GS and newer iPod Touch owners will probably do better.

For those who are new to the game, there is a dojo that will help you to learn the moves.  There is also a free-sparring mode and a training room mode to help you perfect your combos and special attacks.

Other features include Bluetooth support for iPhone head-to-head combat and the ability to save your best games.

I’d say at $9.99 this game is a steal.  Some may want to wait for a price drop, but SF fans should get this one immediately.