One thing that makes me like an airport right away is free wifi. Although 3G speed is great on the iPhone, I still think it doesn’t compare to wifi.

As my fiancée and I were flying out of San Diego yesterday, I used my iPhone to go online to tweet, read the news and do some last minute emailing.

I know that San Diego’s airport has free wifi but I kinda forgot about it. I took my iPhone and launched the mail.app, which immediately returned the following screen asking me to agree to the TOS.

It’s a little detail but I don’t think it ever was documented. On 2.x, whenever you were connecting your iPhone to a free Internet access requiring you to agree to some TOS, you first had to open Safari and agree to the TOS from there.

Now you can do that directly from inside the app that needs Internet access.

As I said above, it’s a detail but it just makes life a little easier. 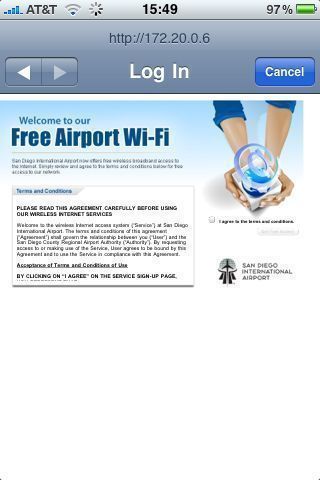