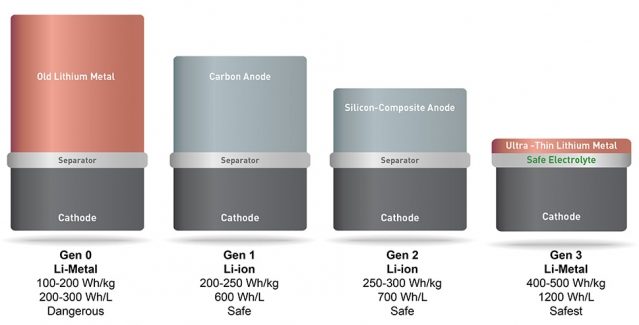 SolidEnergy Systems, MIT’s commercial spin-off, has managed to create a technology which promises to double the capacity of standard lithium-ion batteries used in today’s gadgets without increasing the size of the battery module.

The trick involves a simple tweak of existing technology that can be incorporated into existing production lines, theoretically bringing twice the battery power to our pockets from 2017.

I know what you’re thinking, but don’t hold your breath for an iPhone with 2x stronger battery. Given Apple’s focus on thinness, thinner iPhones with the same or marginally better run time as existing models are much more likely.

The substantial breakthrough the scientists have made involves replacing the graphite anode with a lithium metal foil, which is denser yet “several times thinner and lighter” than traditional lithium metal, graphite, carbon or silicon anodes.

The invention holds twice the battery power versus existing solutions and is also safer due to a novel electrolyte keeping the battery from heating up and catching fire.

In addition to mobile gadgets, this technology is likely to make a big difference in electric cars by doubling their range and making them more sellable to the general public.

That about sums it up the best way possible.

What do you think, will Apple implement this technology to engineer an even thinner iPhone with the same battery life or one with twice the battery power than today’s handsets without making it any slimmer?