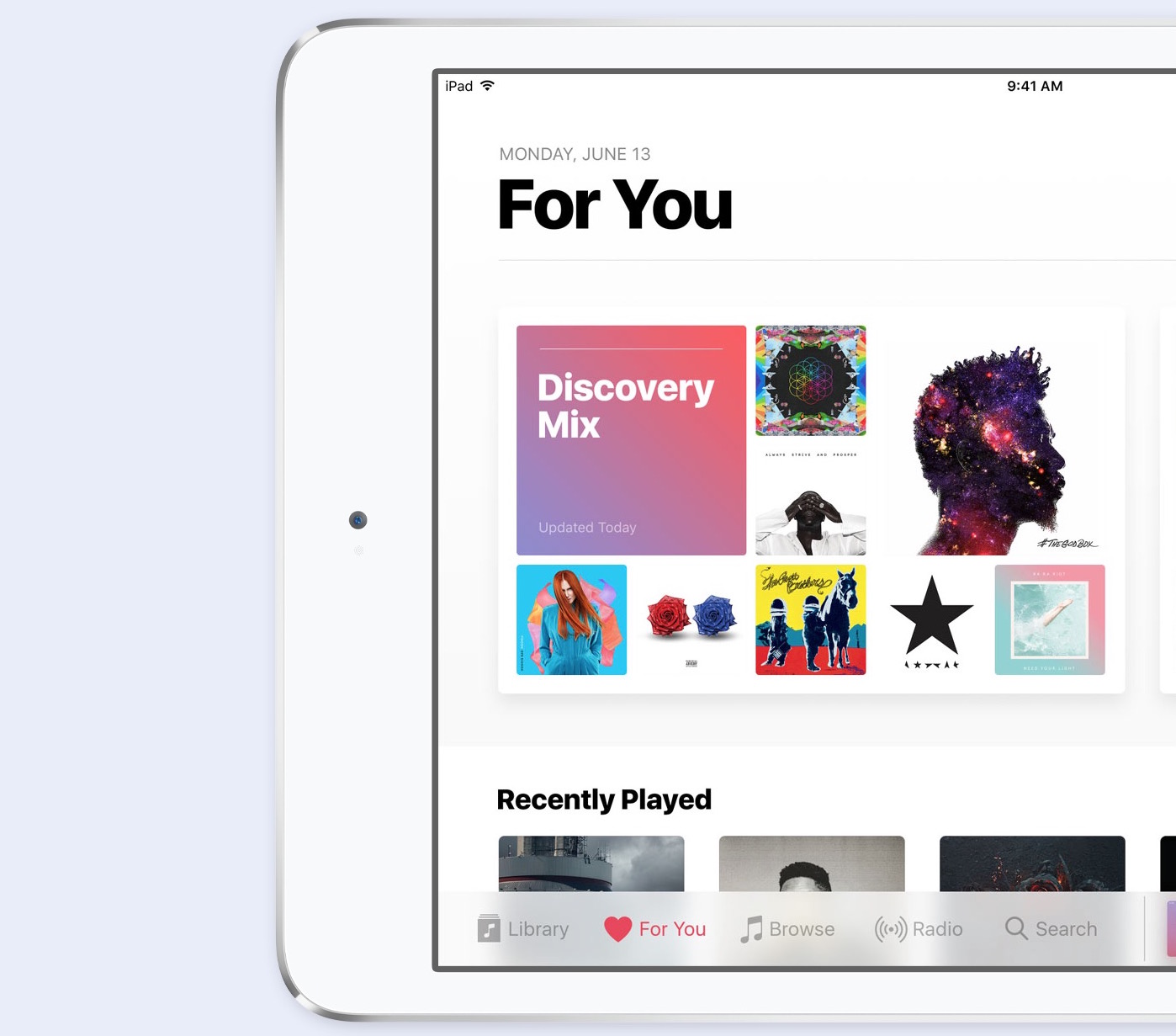 Apple Music is a great service, but the confusing and bloated user interface of the application has been criticized since the app was first released about a year ago. So when rumors started popping up that Apple had been working on simplifying the app, many got really excited, myself included.

Yet, when Apple showed off the new Music app on stage at WWDC a little over a week ago, I didn’t see anything simpler or more streamlined about the app. It’s only when I started using iOS 10 beta and the new Music app that my fears were confirmed.

Now that I’ve been playing with the Music app for a few days, I feel I have enough feedback to share a few quick thoughts with you. Don’t worry, it’s not all bad.

I don’t seem to be the only one being unimpressed by the new Music app. Jim Dalrymple of The Loop hits the nail right on the head by highlighting what I believe to be my biggest grips with the new Music app. When talking about his expectations for the Music app prior to WWDC, Dalrymple says:

Instead, we got a new interface. One that looks, in places, like a web page loaded without the corresponding CSS. An interface that requires more taps to do simple tasks like “Love” a song or find a genre radio station. For the most part, the interface is more confusing now then it’s ever been.

In the new Apple Music app, Apple has been heavily emphasizing the different sections and subsections of the app with big bold letters. I’m not a fan of it from a design standpoint, although I think it will grow on me over time. But from a usability standpoint, I think Apple made things even worse.

Sure I can read better in what section of the app I am, but these big letters take away some precious screen real estate. The way I see it, if I tap on a tab in the Music app, I know exactly where I am, so there is no need to take 15% of the screen to remind my I am in my Library. 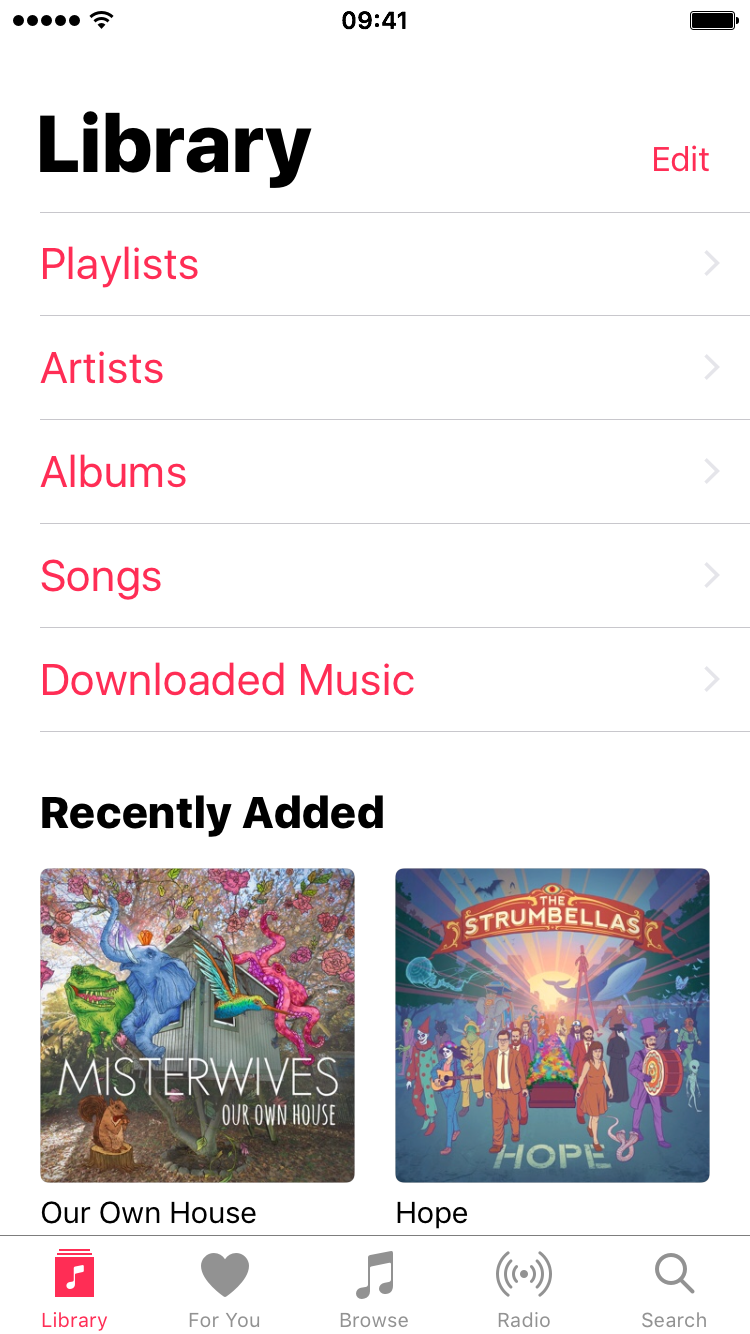 The main tab in the new Music app

To me, it feels like Apple said “let’s make things better by labeling everything with bigger letters,” but you don’t fix bloated software by using larger fonts. Again, it’s nice because it makes it easier to see where I am in the app, but it doesn’t solve the main problem. If anything, it actually highlights what a mess the app is by displaying so much information when all you want to do is play music.

One of the big design pushes Apple made in the new Music app under iOS 10 is the use of bigger artwork when possible. Interestingly enough, after several days of usage, I feel this is actually a nice addition to the app, at least in most cases.

A perfect example of this is in the Radio tab where it can show more of my recently played stations on one screen, without stuffing in my face stations I don’t care about like the Pure Pop or Soundsystem stations. 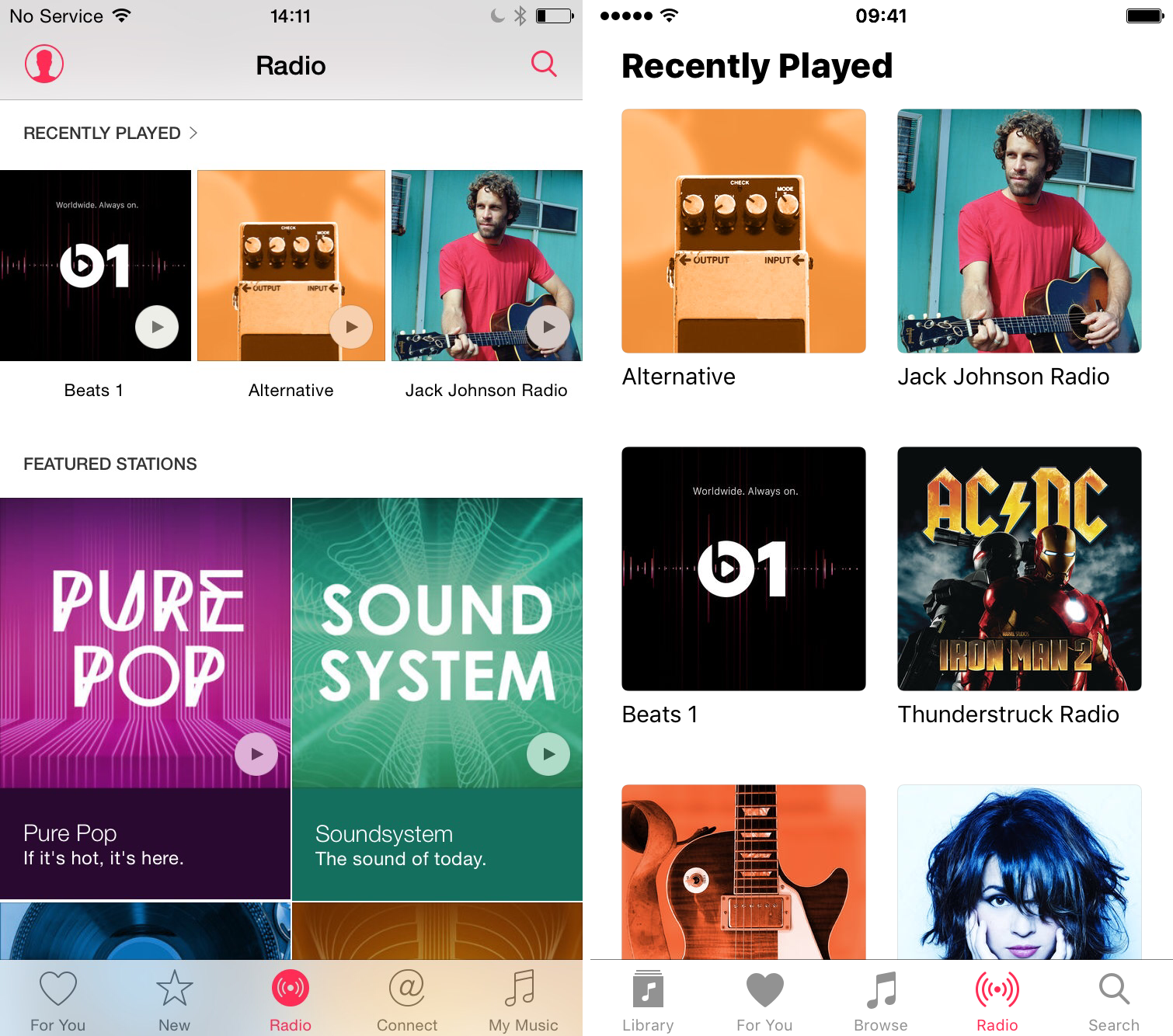 Old Music app to the left, new to the right

Bigger controls is also a welcome addition. Lock screen controls are the perfect example of this where button are now larger, and music information such as the artist and name of the song are bigger too, making it easier to read what’s playing.

However, at times, using bigger artwork means that you can actually see less albums or playlists on one given screen. As you can see on the screenshots below, the old Music app would show me up to 6 album or playlist covers at once while the new Music app barely shows 3. 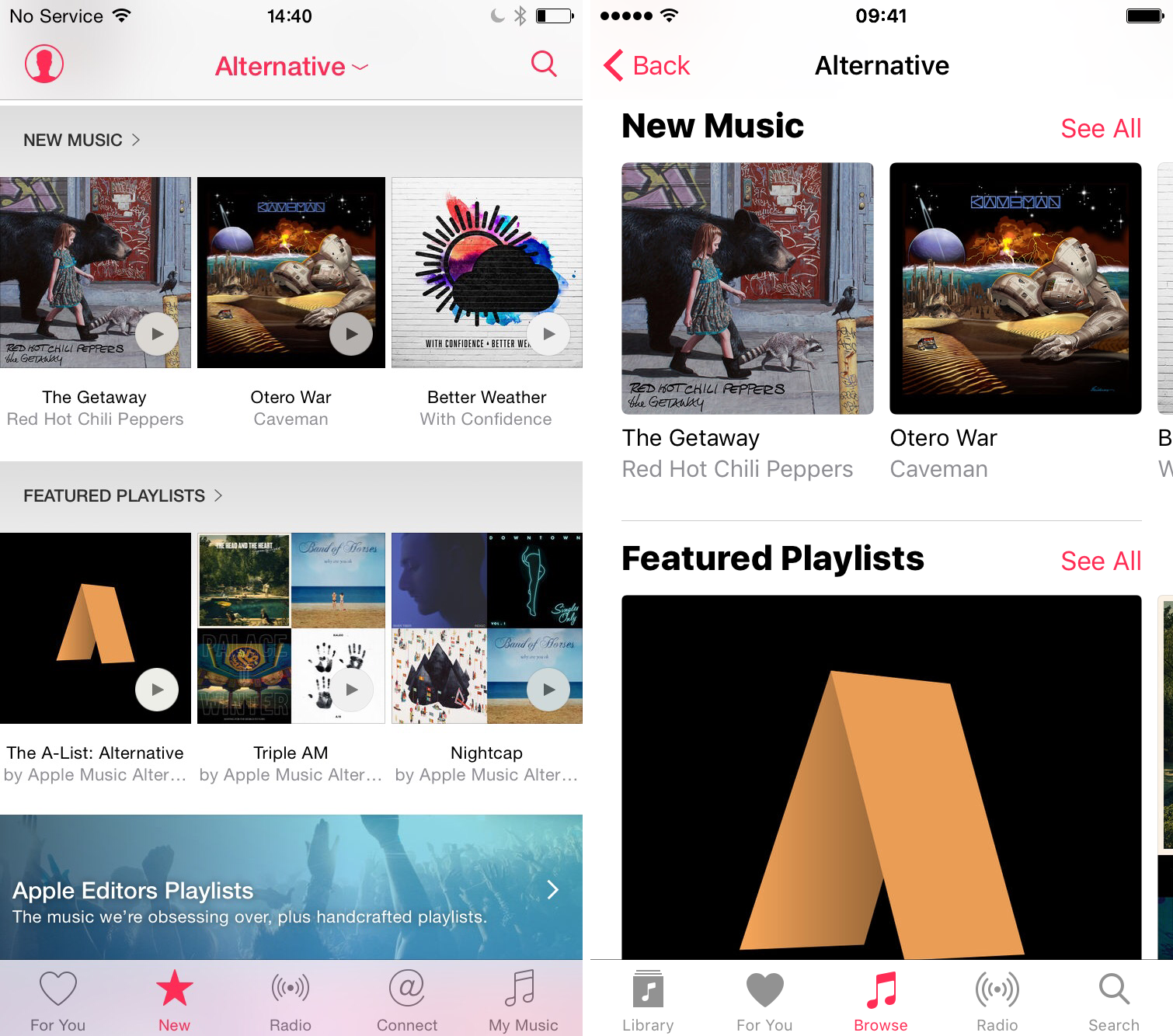 That older design also gave me a better sense of space and place. In the new design, I feel lost and overwhelmed very quickly. Maybe it’s just me.

More taps for just about everything

But to me, the real drawback here is that just about everything takes more taps to accomplish in the new Music app.

Want to Love a song? It will take you one more tap to get there.

Before, the Love button was directly next to the controls, both on the Lock screen, and inside the music player. Now if you want to Love a song, you will first have to tap on the ellipsis, then tap Love. Something tells me that loving a song that’s currently playing while cooking or driving is not going to happen anymore, because it’s now a two-step action instead of one quick tap.

By the way, the same is true on the Music app on Apple Watch. 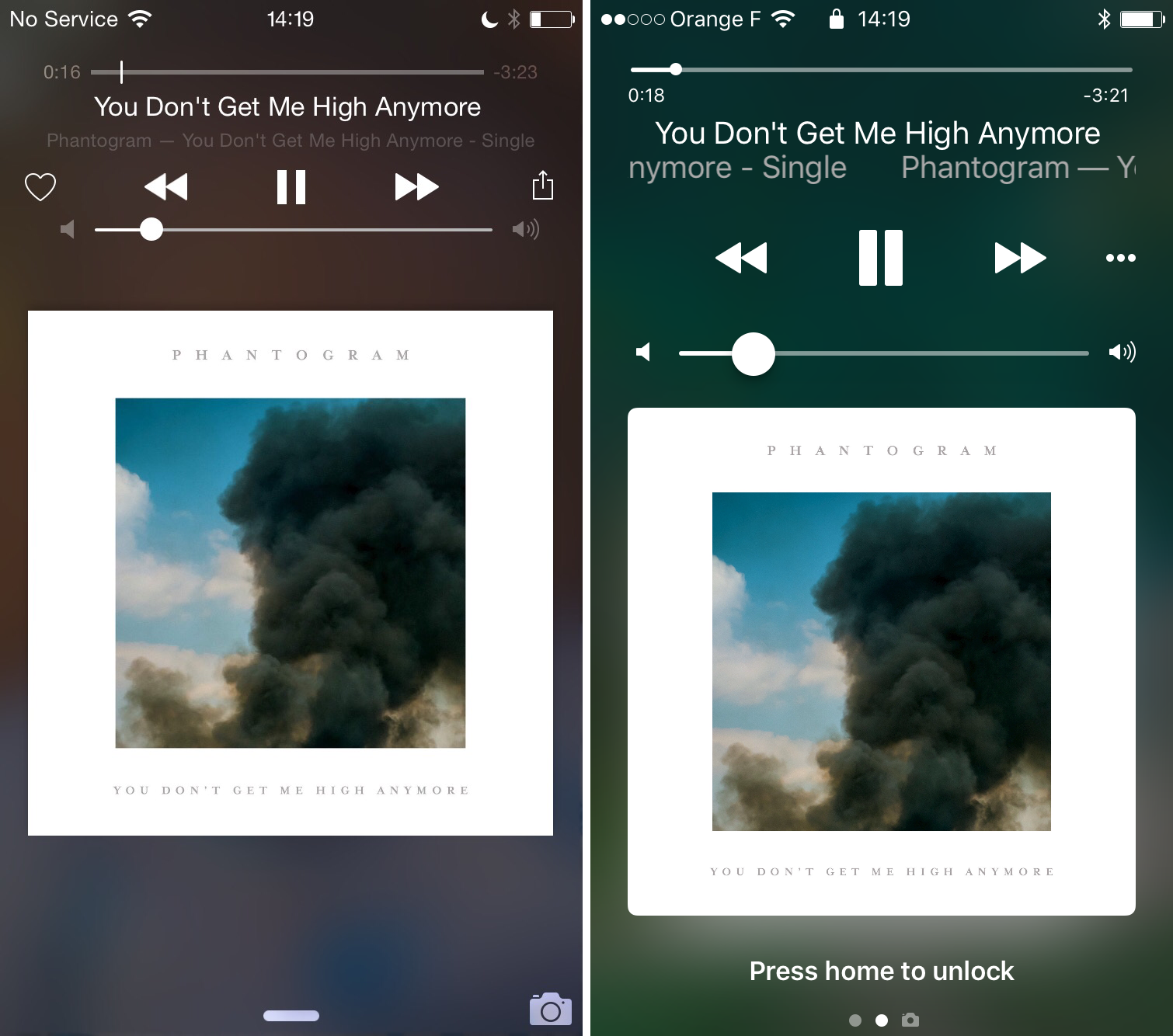 No love for the Love button in iOS 10

Want to start playing a playlist or album from the main screen? Yup, it will take you one more tap to start listening to it. Before, you would just tap on the play button overlay that is directly on the cover art. Now you need to first tap the cover art and then tap to play the first song in the album or playlist.

I understand that the new Music app is still in beta and things might change a little bit here and there, but I highly doubt we’ll see this app evolve too much until it is released to the public along iOS 10, presumably sometimes in September.

As I said, I’m not a fan of the overall design but I’m sure I will eventually get over it. What really bothers me the most is that everything now seems more complex, and in most cases, takes more efforts from me to get to play to what I want to listen to, or perform the actions I want to take, such as loving a song.

If you’ve been using iOS 10 beta, what’s your experience been so far with the new Music app?