Every so often you send or receive a cherishable or important message in the Messages app on your iPhone, whether by SMS or iMessage. In some cases, it would be really nice if iOS offered a way for you to boak ark those messages so you could look back on them more easily later on.

A new free jailbreak tweak called SmsSave is available in Cydia and gives you the power to bookmark messages right inside of the Messages app on your iOS device. We’re going to show you in this review how it’s used and talk about why it’s going to be helpful.

Bookmarking your messages for later reference

I always find myself wanting to look back in my Messages app to try and find a very specific message someone has sent to me, or that I’ve sent to someone else. Unfortunately, the search feature in the Messages app isn’t always so helpful and I rarely find what I want with it.

For that reason, I’ve found that it’s generally a good idea to save important messages as you send or receive them. Typically, I’ll just copy and paste them into the Notes app or something, but still, that means using two apps to manage something that would have been nice to manage right from the Messages app itself in the first place.

Enter SmsSave, a new free jailbreak tweak that handles all of your conversation bookmarking needs right from the Messages app itself.

With the tweak installed, you’ll be able to tap and hold on any chat bubble from a conversation in the Messages app, and a Save button will appear in the Action Menu above it: 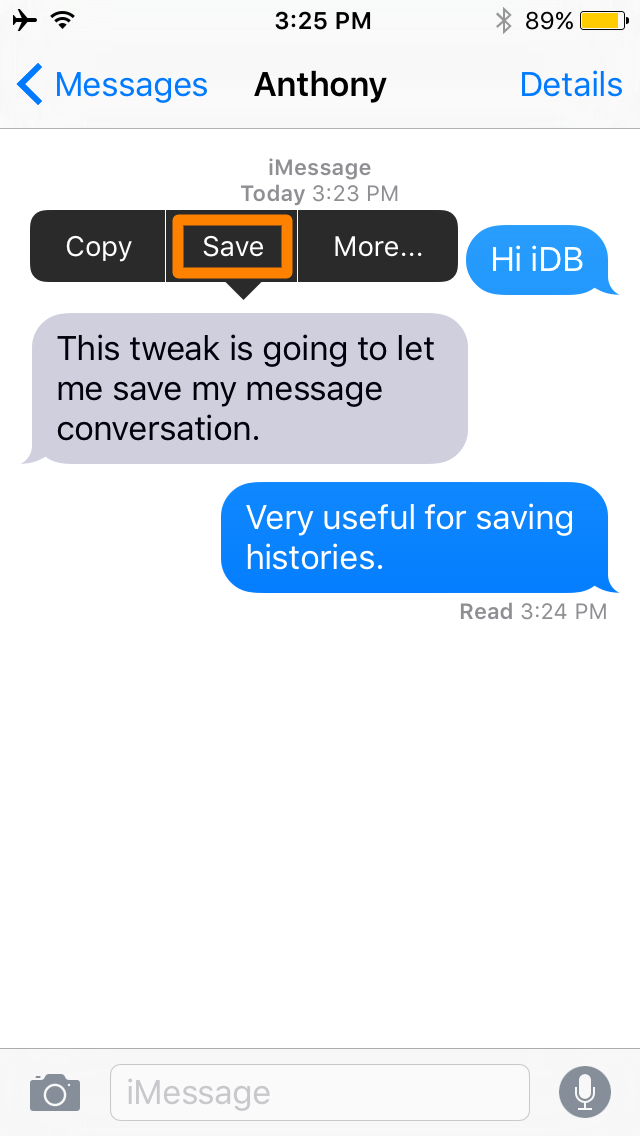 After you tap on that button, it’ll be archived into a special local database that has been created specifically for your bookmarked messages. To access it, you go back out to the conversation threat view in your Messages app, and then you tap on the Star button in the app’s navigation bar (it’s right by the compose message button). 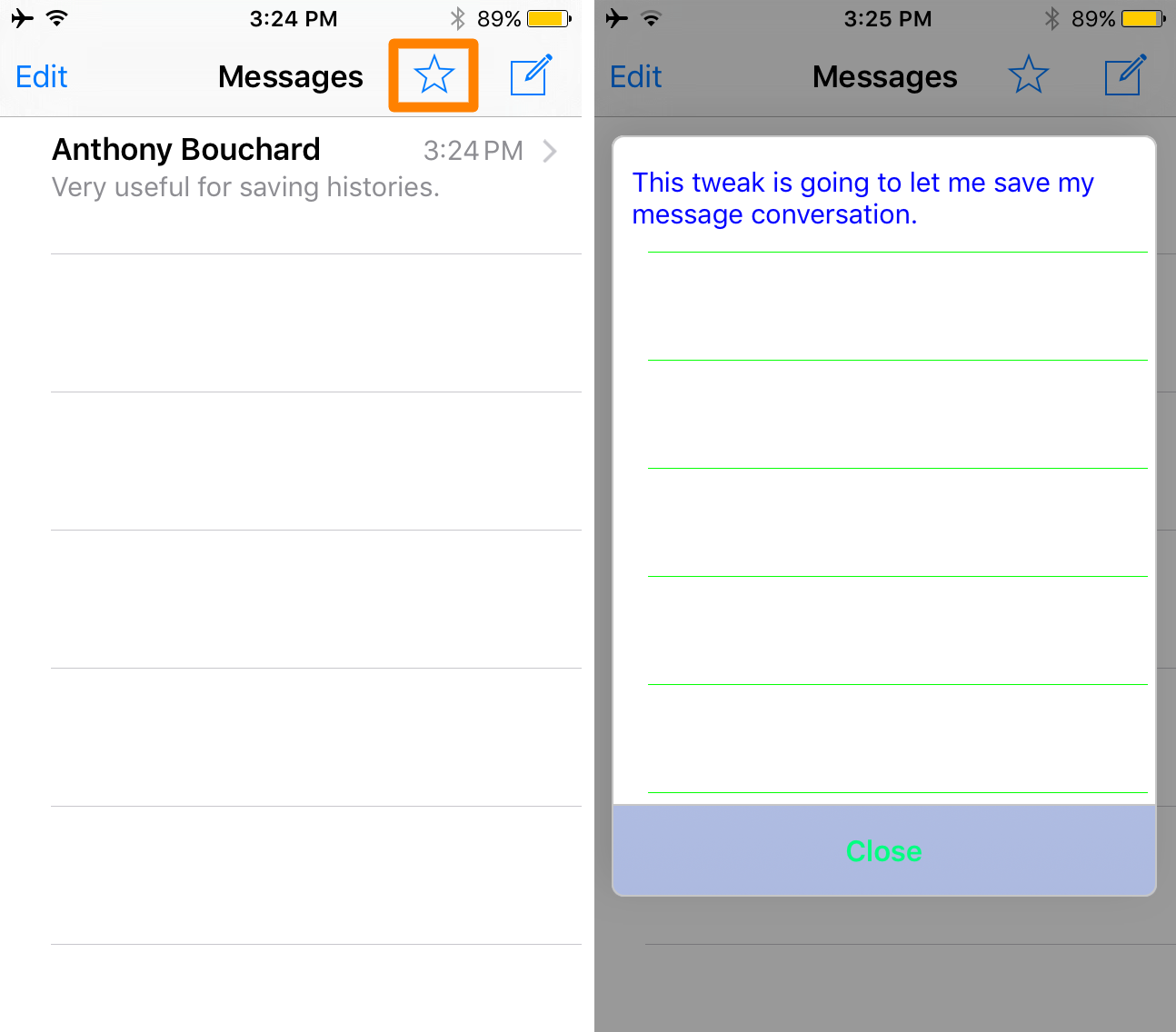 This will open the interface you see above. It’s going to have, in list form, all of the messages you’ve bookmarkEd using the tweak. You can always delete messages from this list by swiping to the left on them and tapping on the red Delete button. 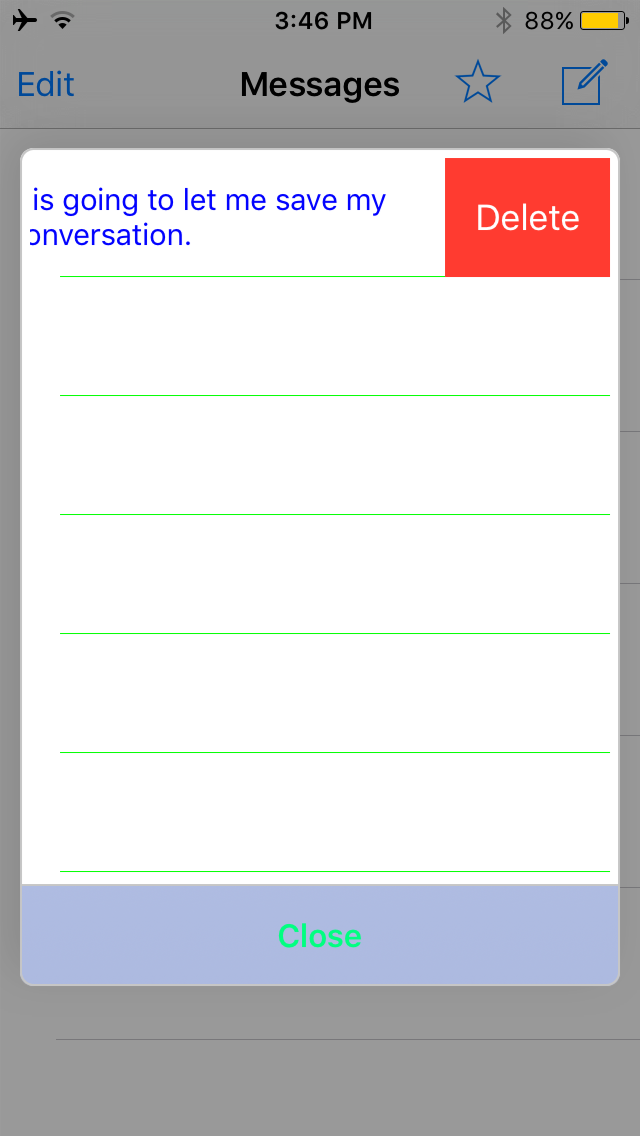 And just like that, you can bookmark and manage your saved messages that you’ve sent and received in your Messages app for iPhone, iPod touch, or iPad.

The developer took a lot of care to make this tweak integrate nicely with the Messages app. Not only can you easily access bookmarkEd messages in the method noted above, but you can also go into any conversation and tap on the Details button in the navigation bar, and you’ll see saved messages at the bottom of the details interface. 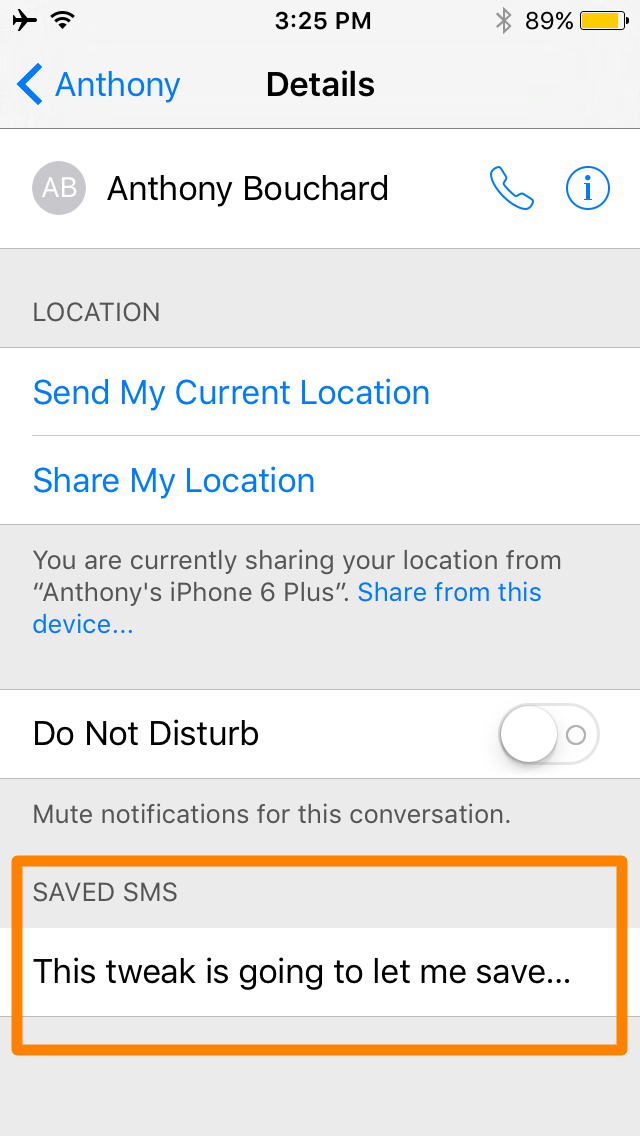 The developer also added some subtle things to make the tweak a little bit more Messages-esque, such as the green tint to the bookmarked messages interface, which reflects on the green Messages app icon.

Because SmsSave is integrated right into the Messages app, I like using it a lot more than I did saving messages to the Notes app manually. It keeps everything integrated into the same app so that everything is easy to access and it keeps me from fumbling around between multiple apps just to keep a record of important messages.

Free of cost in Cydia’s BigBoss repository, I think this tweak is well worth the download for people who do a lot of messaging, whether it’s with SMS or iMessage. Unfortunately, the tweak doesn’t work with other third-party messaging services, like Facebook Messenger or WhatsApp.

SmsSave doesn’t come with any options to configure, and it’s a really useful addition to any jailbroken device that sees a lot of messaging. The fact that the tweak is built into the Messages app makes bookmarking important messages very easy and convenient. I’d suggest checking it out!

What are your thoughts on SmsSave? Share in the comments!