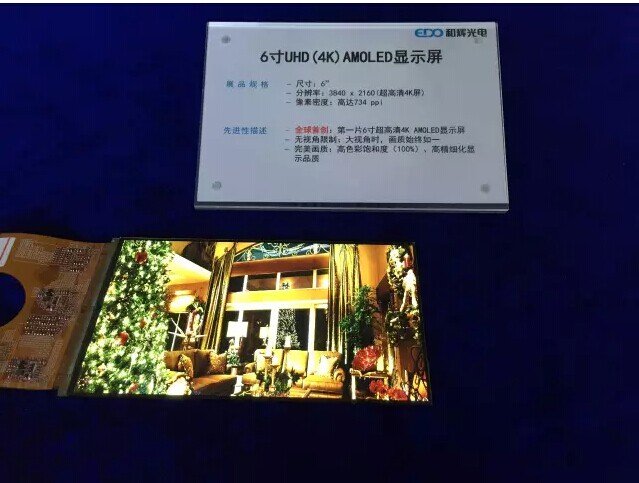 Competition in the market for mobile display technology intensified Thursday with news that manufacturer Everdisplay showed off the world’s first six-inch AMOLED screen boasting an unprecedented density of 734 pixels per inch.

To put that in context, the iPhone 6 Plus’s 5.5-inch full HD screen has a pixel density of 401 pixels per inch (PPI) while the rest of Apple’s iPhone lineup has 326 PPI Retina screens.

By comparison, Sharp’s 5.5-inch IGZO LCD display with a 4K resolution of 2,160-by-3,840 pixels at a whopping 806 PPI is currently the world’s highest-density display.

Another comparison: the highest density AMOLED display in mass production is Samsung’s 5.1-inch panel featured on the Samsung Galaxy S6, which boasts a pixel density of 577 pixels per inch.

But the technology isn’t standing still: last November, Japan’s SEL showed off a 2.8-inch 2,560-by-1,440 pixel resolution screen with a cray pixel density of 1,058 PPI though the panel hasn’t moved beyond the prototype stage since.

And let’s not forget Samsung Display, which has embarked on a project to engineer the world’s first “super dimension” mobile display with an 11K resolution at an astounding 2,250 PPI sharpness. The South Korean firm expect to show the first prototype by the 2018 Pyeongchang Winter Olympics.

Samsung’s upcoming Galaxy Note 5 phablet, due for unveiling later this month, is rumored to rock a 5.9-inch ultra high-definition screen with a pixel density of 746 PPI.

First devices with Everdisplay’s new screen are expected next year.

Everdisplay also makes 5.5 and 6-inch smartphone displays and eight-inch panels for the automotive market. In addition, the company is currently developing a 1.4-inch circular AMOLED screen for wearables with a resolution of 400-by-400 pixels. The 42mm Apple Watch, for example, has a 1.5 inch 312-by-390 pixel resolution screen.

Whether or not smartphones and tablets require such an ultra-high resolution display has yet to be seen, but technology marches forward and I have no doubt in my mind that these types of screen will make it into mobile products as soon as mobile processors and graphics chips are powerful enough to handle 8K resolution.

While the human eye may not be able to discern the difference between today’s Retina screens and an 8K smartphone screen, having more pixels will be useful for enjoying 4K video on the go, editing documents, browsing panoramic images and for virtual reality applications and devices such as Facebook-owned Oculus Rift, to name just a few.