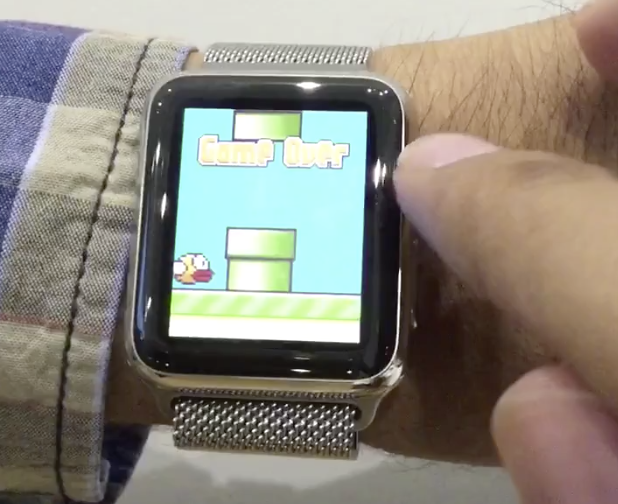 Native apps are indeed coming to Apple Watch in watchOS 2, but one developer is jumping the gun and showcasing his native clone of Flappy Bird running on Apple’s wearable. Developer Hamza Sood, who is no stranger to hacks, tweaks and leaks involving Apple products, just revealed his Flappy Bird clone on video.

Want to see what it looks and sounds like to have a game utilizing native frameworks, Digital Crown control, and speaker output on Apple Watch? If so, watch this video.

The game, aptly dubbed NanoFlappy, is using native SpriteKit rendering and features both touch screen control and Digital Crown support for moving the bird up and down to avoid obstacles. The game also supports speaker output so that you can hear sound effects directly from the Apple Watch.

From the looks of it, the game loads fast and runs without any discernible lag or slowdown. That’s one of the benefits of running native code directly on the Apple Watch hardware itself.

Of course, watchOS 2 will usher in native games and apps for developers, though they still run out of process and won’t have access to frameworks like SpriteKit, or deep Digital Crown support outside of a simple picker element.

What do you think about Hamza’s hack?