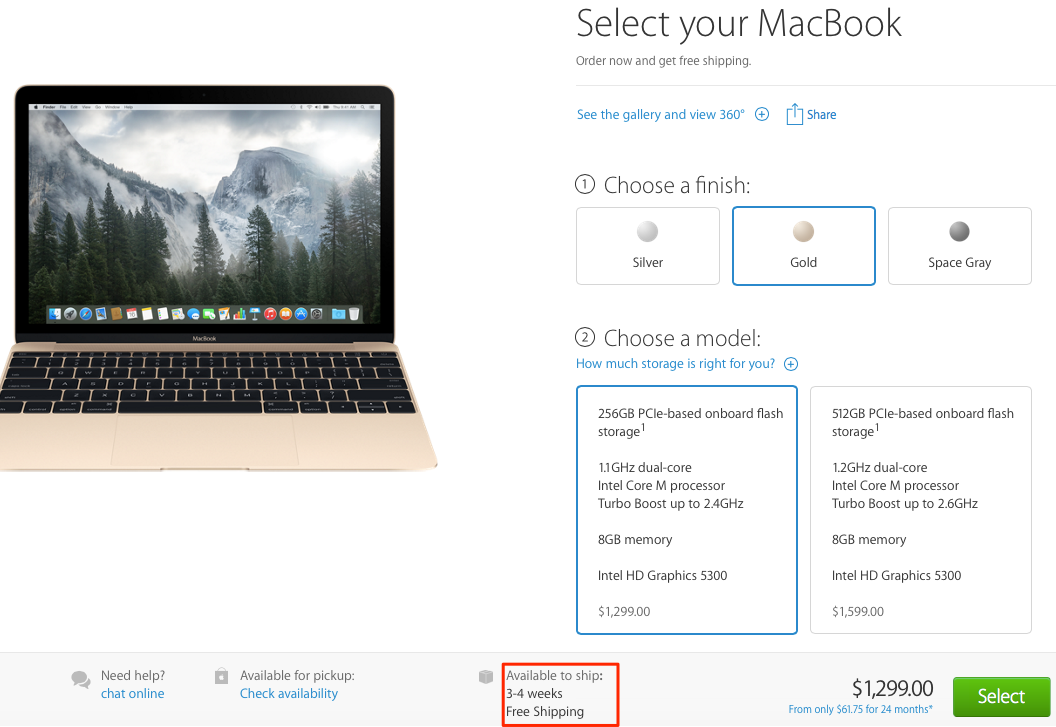 It’s not just the Apple Watch, Apple’s one-port $1,299 twelve-inch MacBook with a Retina screen is seeing limited availability across online and brick-and-mortar Apple Stores, with shipping times for gold models in both 256 and 512GB flavors now having slipped to 3-4 weeks. And across many international markets at availability of the new machine has already slipped to 4-6 weeks.

Worse, the sexy new notebook appears to be limited to online purchases in many locations around the world at launch. Indeed, as some users have reported on Twitter, customizing your MacBook may prompt the Online Apple Store to put up a “This customized Mac takes a bit longer to build” message.

At post time, all Silver and Space Grey MacBook models were available to ship in 3-4 days in the United States. Customizing the laptop — regardless of your chosen model, finish or storage — immediately extends shipping quotes to 3-4 weeks.

MacRumors was able to independently confirm with an Apple support representative that many Apple Stores won’t be carrying stock of the twelve-inch notebook on launch day.

It looks like Apple Stores are NOT stocking Retina MacBooks today. pic.twitter.com/VhXIYJlVc6

“At this point and time the MacBook is only available to ship for store or online purchases,” an Apple support representative wrote. Many Apple Stores in the United States, Canada and the United Kingdom lack in-store stock and display models of the machine.

And in many European countries like Germany, Italy and other markets around the world, the Online Apple Store is now citing a shipping estimate of 4-6 weeks across all twelve-inch MacBook models, custom-built or not.