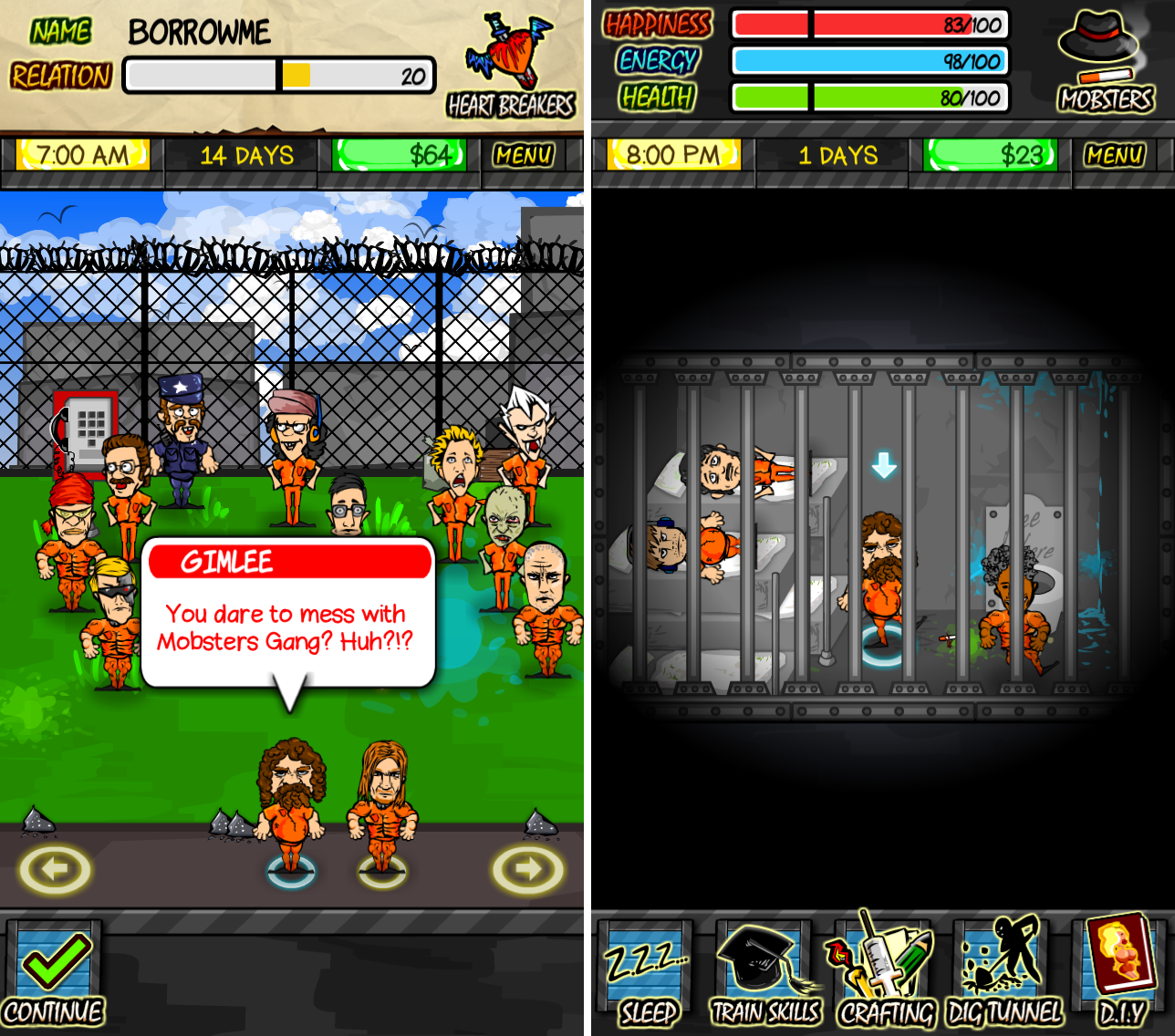 There are simulators for all kinds of life experiences, including running a theme park, building a bustling metropolis, and owning the airlines. There is a darker side to life, though. Now, anyone can be a part of it.

Prison Life RPG is a lot more creative than its name implies. It is a prison life simulator where players must make friends, join gangs, and stab people in the shower in order to survive. We’ve got a hands-on game review of Prison Life RPG for your reading pleasure.

Players select a new inmate to start a prison sentence with. Your time behind bars takes place across an in-game daily time frame that starts at 6:00 a.m. with lights-out at 8:00 p.m. Every day, players must navigate the inner politics of bribing guards, extorting other inmates, taking odd jobs for money from the mobsters, and other prison life activities. Even lunchtime can be a difficult event. If you sit at the wrong table, you may have to fight or lose your meal.

Players interact with other inmates in four locations, the yard, the cells, the dining hall, and the showers. Move from one gang’s area to the next by tapping the arrow on the side of the screen. Interact with inmates by selecting one and then either socializing or fighting with them.

The graphics are cartoonish with characters walking in a funny sideways motion. Many of the inmates reference of some pop culture icon. For example, Mr. Garrisoon, The Chef, Kyler, and Eric pay homage to South Park, while Borrowme, Frogdo, Gimlee, Golem, Aragong, Gangolf, and Sam refer to the Lord of the Rings.

There are other funny references throughout the game. When interacting with characters, some of them have clever quips that will put a smile on your face. 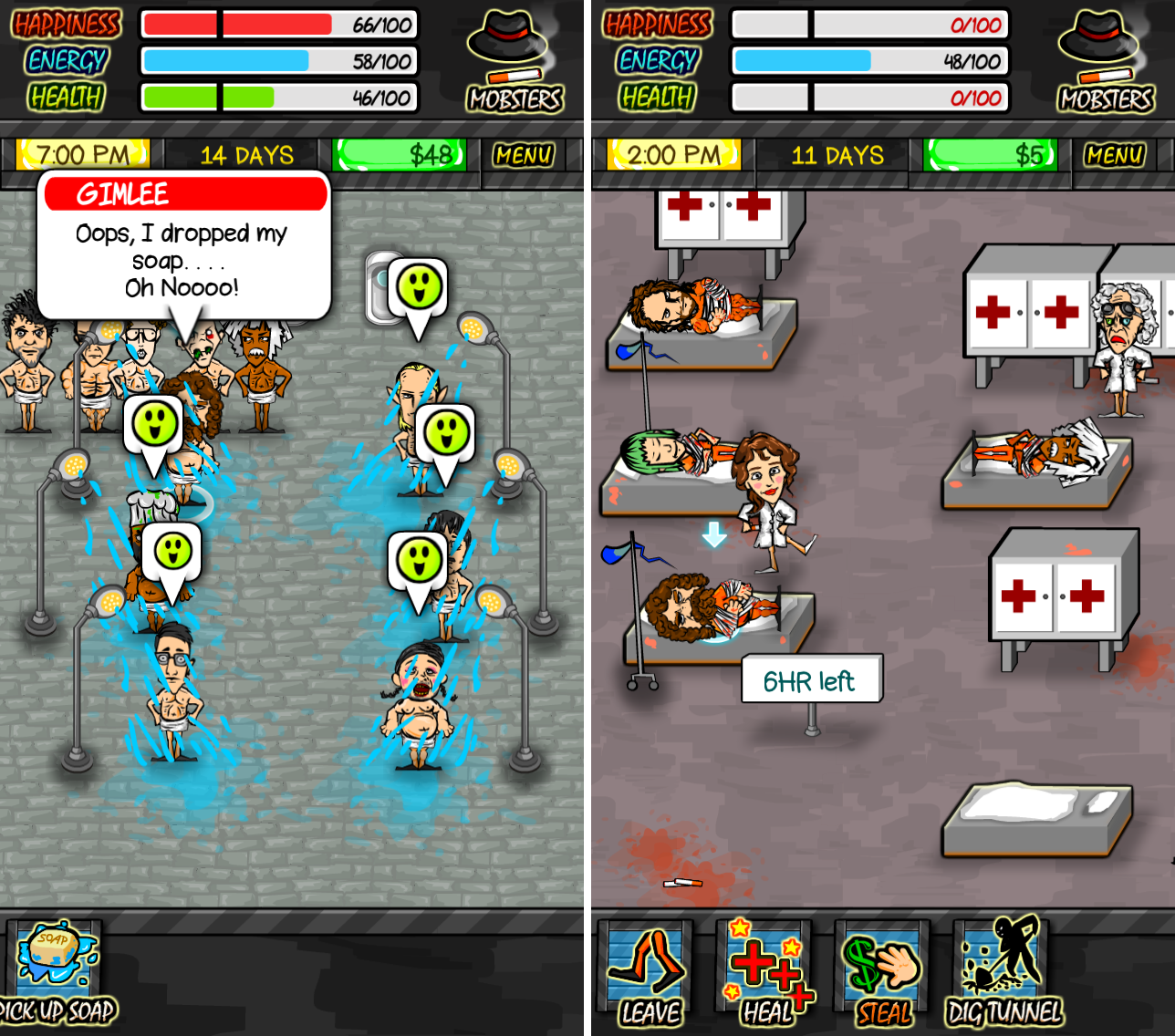 Players start by selecting an inmate. Beginners choose from inmates that only serve a 20-day sentence. Unlock longer sentences by completing personal goals. Each inmate has certain skills and attributes. I recommend starting off with a character that is particularly good at socializing. You would be amazed at how quickly you can learn new skills if you are friendly enough.

To survive, players must maintain their happiness, energy, and health. Each stat goes up or down depending on the activities of the day. For example, socializing and working reduce energy. Not eating reduces health. Getting bullied reduces happiness. Players must find ways to increase those stats while in prison.

Everything that happens in the game is based on rolls plus skills. Your spec attributes increase the starting number that you will roll and skills automatically add points to the final number.

In the yard and the cells, players can choose to take a nap, which increases energy, remain idle, which will provide some small item, like a long nail, cockroach, or bit of gossip, or go to work for the guards, which increases your relationship with guards, but does not earn very much money.

Players can also interact with other inmates. The best way to get started is to socialize with as many inmates as possible. Pick a gang you wish to join, socialize with an inmate that has the skill needed to join that gang (if you don’t already have it), become best-buds with that inmate and get him to teach you the skill.

Once you are in a gang, you will have support when someone tries to bully you. You’ll also be able to extort other inmates for money and their stuff.

At lunch, you must pick a table to sit at. Don’t sit at a table that has gang members you are not affiliated with or they will pick a fight with you. Fights will lead you to either the infirmary or solitary confinement.

When it is time to hit the showers, players roll for agility and luck. If you know basketball, you will get extra points. If you fail, you “dropped the soap” and either have to pick it up, or find a way to distract the inmates (usually by fighting or assassinating someone).

When it is time for lights-out, players can craft and train skills. Crafting requires certain items (like cockroaches or long nails). Skill training requires energy.

Every morning players lose happiness or health (or both), while energy is increased because waking up in prison sucks. Then, the day starts over.

Instead of just finding a way to survive in prison, players can also try to escape. Make friends that you can recruit to your escape team. Dig tunnels while in your cell or solitary confinement. Convince your lawyer, wife, or girlfriend to bring you a car and a change of clothing. 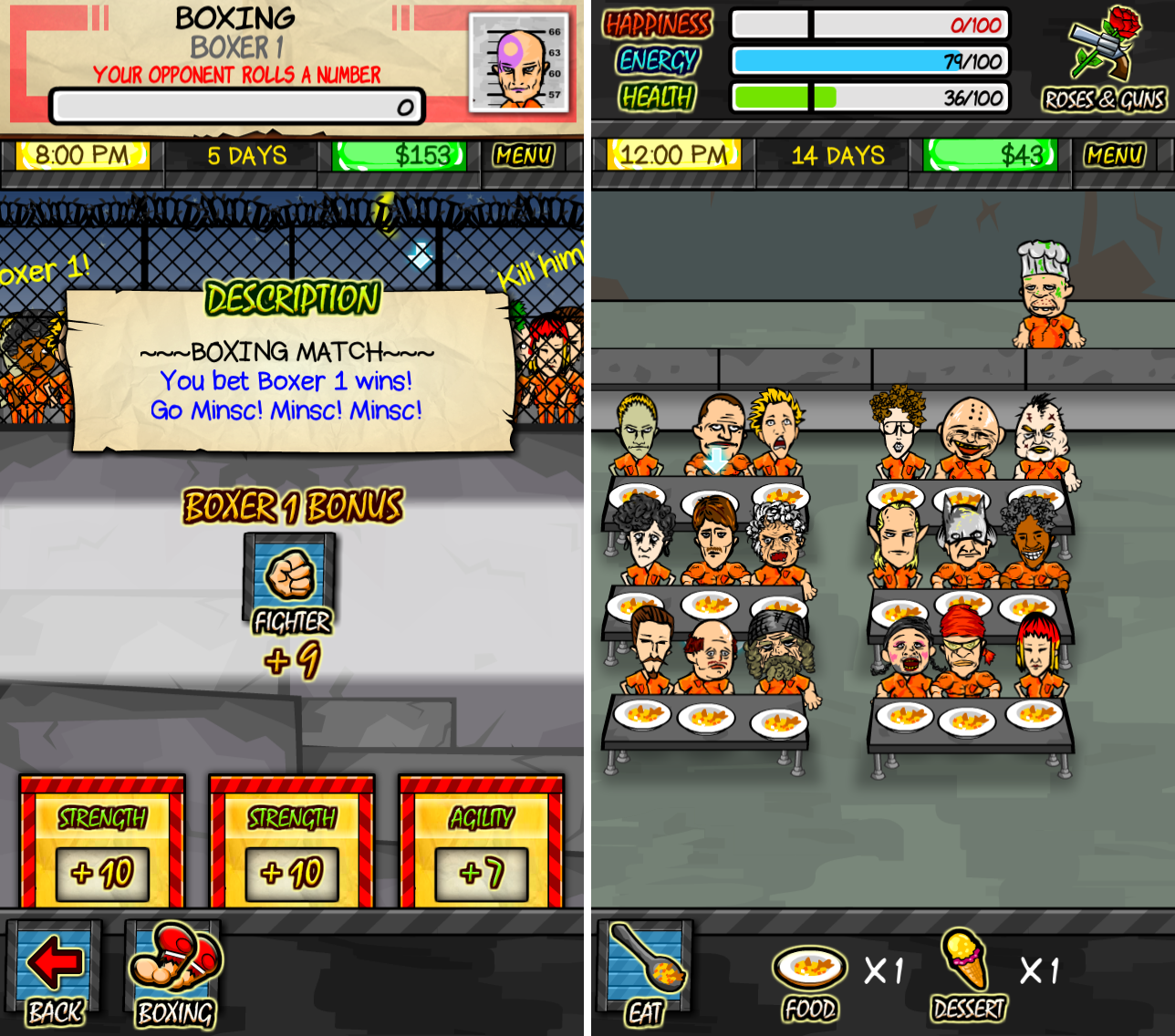 The game mechanics are based off of a task and reward system. For everything you do, there is a reward. So, it becomes addicting to try to complete the next task, learn a new skill, or earn more money. I played the game for hours at a time. I kept telling myself I’d put it down after the next day, but would keep playing.

The game only saves at the end of each in-game day. I’d like to be able to save at different times so I can pick up where I left off instead of having to start the day over.

Prison Life RPG costs $3.99. You may be thinking that it is expensive, but it’s not. This game has no in-app purchases of any kind and the replay value is huge. There are 100 different prisoners to play as and repeat offenders have longer sentences. You can try to survive, escape, or die in prison. It’s up to you.

I highly recommend this game. It is loads of fun and easy to get sucked into. I’ll warn you that the first few days are really rough. But, if you manage to join a gang, things get a lot better. Then, it is all about playing the politics while finding the best way out of prison. This game is available on the iPhone, iPad, and iPod touch. Download it in the App Store today.

This game actually reminds me more of Tiny Tower than Hard Times.