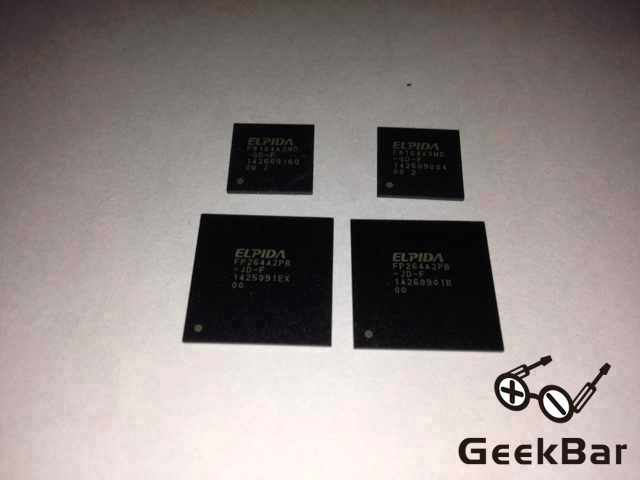 The photo above depicts what is claimed to be the 2GB Elpida RAM module Apple is using in the iPad Air 2. The origin of the part in the image, which was posted to Weibo last night, is unknown, but it appears fairly similar to the 1GB Elpida RAM found in the first generation Air.

Reports suggesting that the new full-sized iPad may feature 2GB of RAM have been bouncing around since mid-August. Many pundits believe that Apple is planning to add greater functionality to its iPad line, in an effort to better differentiate its tablets from its larger smartphones.

And according to clues found hidden within developer betas of iOS 8 and 8.1, that greater functionality could come in the form of Touch ID support, higher resolution displays, and a new split-screen multitasking feature—the latter of which would really benefit from the added RAM.

Additionally, the iPad Air 2 is expected to feature a thinner casing, with recessed volume buttons and other minor tweaks, anti-reflective coating, and a new gold colorway option. It’ll also likely feature the A8 processor and M8 co-processor found in the iPhone 6, or a variation of them.

On Wednesday, Apple sent out media invitations for an October 16 event, where it will likely unveil new iPads, Macs and more.