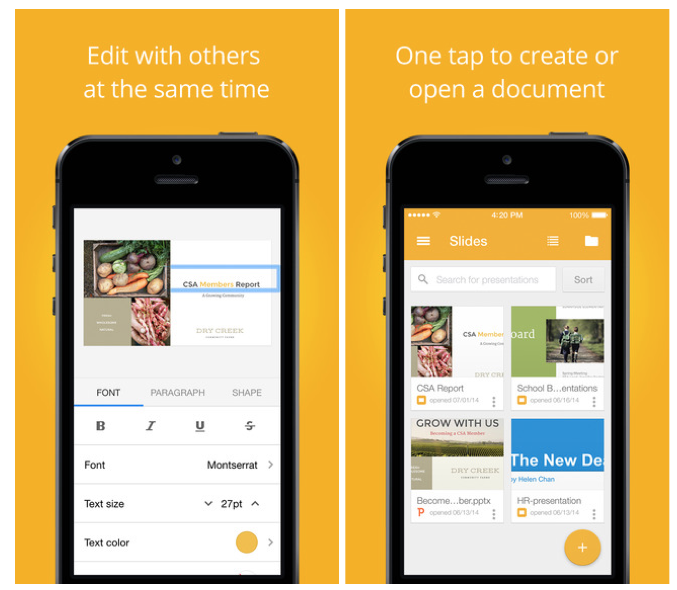 Google announced on Monday it’s rounding out its Google Drive app lineup on iOS, by releasing a Slides app alongside updates to its existing Docs and Sheets apps. The Slides app, now available to download on the iTunes App Store for iPhone and iPad, allows users to create, edit, and collaborate with other users on presentations. It’s a great competitor to Apple’s Keynote application, and once again highlights Google’s commitment to the App Store.

The Slides app, with its yellow user interface, enables users to create new presentations or edit any that were created on the web or on another device, share presentations and work together with others in the same presentation at the same time, open, edit, and save Microsoft PowerPoint files, work offline, add and rearrange slides, format text and shapes, and present right from your device. Google has also added an auto save feature to the app, ensuring you don’t lose any of your files as you work.

Past the new Slides app, the Docs and Sheets apps have also been updated, gaining the ability to open, edit, and save Microsoft Word and Excel files.

With today’s launch of the Slides app for iPhone & iPad and updates to the and Sheets apps, we’re delivering on our promise to make it possible for you to work with any file, on any device, any time,” Google wrote on its Drive blog. “You can now create that grocery list, edit that spreadsheet, and update that slide deck with no problem.”

Google dominates the top 10 chart with 5 of the top 10 apps on the App Store and Google Play, according to data released by ComScore last week. Google has long had a commitment to providing its mobile apps across all platforms, even having a website highlighting the more than 15 apps it offers on iOS.