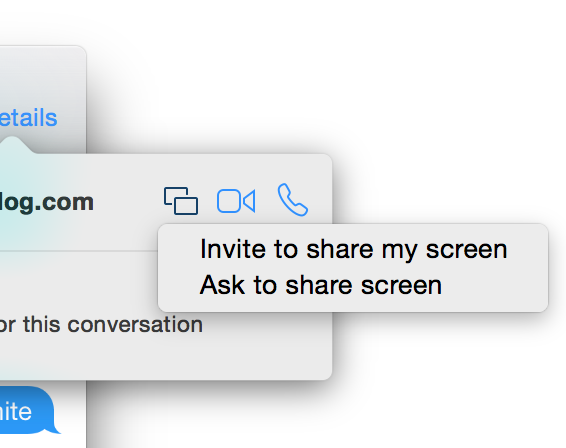 Although I was unable to fully test the functionality of this new screen sharing feature, it’s easy to see that the hooks are there to support screen sharing via the Messages app.

To see the option, open the Messages app while running Yosemite, initiate an iMessage conversation, and click on the Details button in the upper right-hand corner of the screen. The details include Do Not Disturb options, along with the ability to initiate a FaceTime video or audio call via the video and audio icons that appear to the right of the contact e-mail address or phone number.

The previous version of OS X did not include a Details button in the upper right-hand corner of an ongoing conversation. While it did include the FaceTime audio and video icons, that was the full extent of additional options. Compare the image below with the other images in this post:

For comparison, the Message app buttons in OS X Mavericks

While there’s little detail as to the pervasiveness of the screen sharing feature, I’m guessing that the feature will be available to iMessage users running OS X 10.10 Yosemite. It would be nice if the option extended to users on the iOS platforms, however.

What do you think about being able to initiate screen sharing directly from the Messages app? Would this cause you to consider using the feature more often? Sound off in the comments section below.