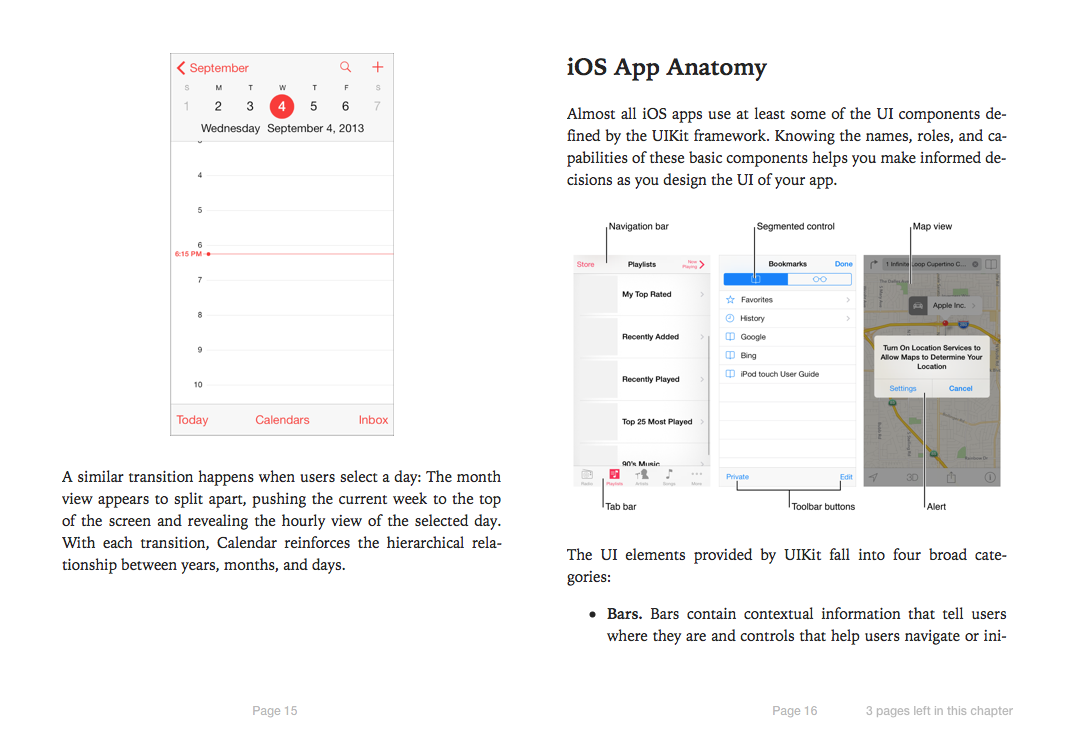 Last night, Apple published an iBooks version of its ‘iOS Human Interface Guidelines.’ The move is notable because until now you could only access the user interface guidelines for iOS 7 via the developer portal, which required a $99-per-year membership.

For those unfamiliar with the document, the guidelines are essentially Apple’s suggestions to developers for designing their iOS applications. The goal is to ensure that all 3rd party apps share similar UI principles, so that they’re both cohesive and intuitive…

Here’s an excerpt from the opening pages of the book (via MacStories):

iOS 7 embodies the following themes:
– Deference. The UI helps users understand and interact with the content, but never competes with it.
– Clarity. Text is legible at every size, icons are precise and lucid, adornments are subtle and appropriate, and a sharpened focus on functionality motivates the design.
– Depth. Visual layers and realistic motion impart vitality and heighten users’ delight and understanding.”Whether you’re redesigning an existing app or creating a new one, consider approaching the job in the way that Apple approached the redesign of the built-in apps:
– First, strip away the UI to expose the app’s core functionality and reaffirm its relevance.
– Next, use the themes of iOS 7 to inform the design of the UI and the user experience. Restore details and embellishments with care and never gratuitously.- Throughout, be prepared to defy precedent, question assumptions, and let a focus on content and functionality motivate every design decision.

The 20 MB guide is available in iBooks on the iPhone, iPad and Macs running OS X Mavericks. It’s displayed in a 2-page layout, with support for inline video, annotations and other useful features. Designers of all skill levels will definitely want to check this out.

If you’re interested, you can find the iOS Human Interface Guidelines in the iBooks Store for free.