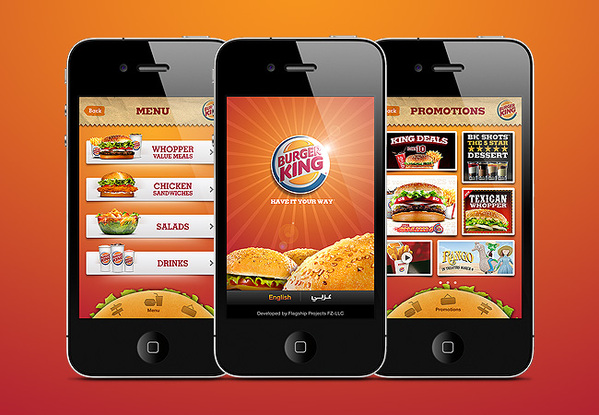 Bloomberg is reporting this afternoon that Burger King, the second-largest burger chain in the US, is introducing an app next month that will allow customers to pay for their Whoppers with smartphones. The outlet says the move is part of an ongoing effort to lure in young diners.

According to a company spokesman, the program will launch in early April in select stores, and should be available in all of Burger King’s 7,000+ American locations within a “few months.” The chain is also looking at adding the ability to order food and drinks for in-store pickup…

The program will be introduced next month and should be in all of Burger King’s more than 7,000 U.S. locations in “a few months,” Bryson Thornton, a spokesman for the company, said in an e-mailed statement. The option to order food and drinks ahead of time for later in-store pickup may be added, he said. […]

Burger King’s app, developed by Tillster Inc., will give customers coupons for deals, such as $1 any-size drinks and free fries, as well as nutrition facts. To pay with mobile phones, users can load value onto a virtual card within the app.

Starbucks has long allowed customers to pay for their orders with their iPhones, and some fast food chains like Subway even allow you to place your order from your phone ahead of time and pick it up in store. Other restaurants offer incentives in their apps like coupons and daily deals.

This is an important space to watch as rumors continue to bounce around that Apple is working on its own mobile payment service that would allow you to make similar transactions. It looks like companies got tired of waiting for a solution, so they’ve decided to come up with their own.