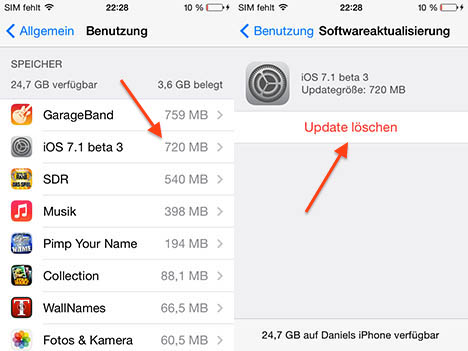 I’m still flabbergasted that many non-techies are totally oblivious to over-the-air iOS updates. I mean, I’ve seen way too many iPhones out there with a badge on the Settings icon denoting a pending iOS update.

When asked why they didn’t act on the notification, the normals usually respond that they couldn’t figure out what it was so they just left it sitting there, consuming valuable storage space.

Turns out that the upcoming iOS 7.1 includes a new feature which allows you to delete these over-the-air installation files from your device without applying the update, in order to free up storage space for apps and media…

As noted by German-language Macerkopf.de (Google translation), after downloading the iOS 7.1 Beta 3 over-the-air, you can now delete the installation file without applying the update, as depicted on the screenshot top of post.

Just fire up the Settings app and navigate to General > Usage. You’ll see the new iOS 7 Beta 3 item listed in the apps section. If you don’t see it, hit Show All Apps further below.

Tap the iOS 7 Beta 3 entry and then hit the Delete Update button on the next screen to remove the installer from your device.

That wasn’t possible before.

The new feature is especially useful given iOS automatically downloads available over-the-air updates when your device is on Wi-Fi and connected to a power outlet. I mean, folks even wanted to take Apple to court over unwanted iOS 7 install downloads.

Previously, an iOS installer would get delivered over-the-air and saved to your device, but wouldn’t get removed unless you actually applied the update.

Now you can remove the installer, a cool feature for those who may have changed their mind about applying the latest iOS software update.

These installation files tend to be fairly large: in the case of iOS 7.1 Beta 3, we’re talking about nearly one gigabyte of reclaimed storage space on the device.

Do you find this feature useful?

Have you come across another little known iOS 7 feature?

Don’t be shy, drop us a line on tips@idownloadblog.com and we’ll consider featuring your tip in our ongoing iOS 7 coverage.