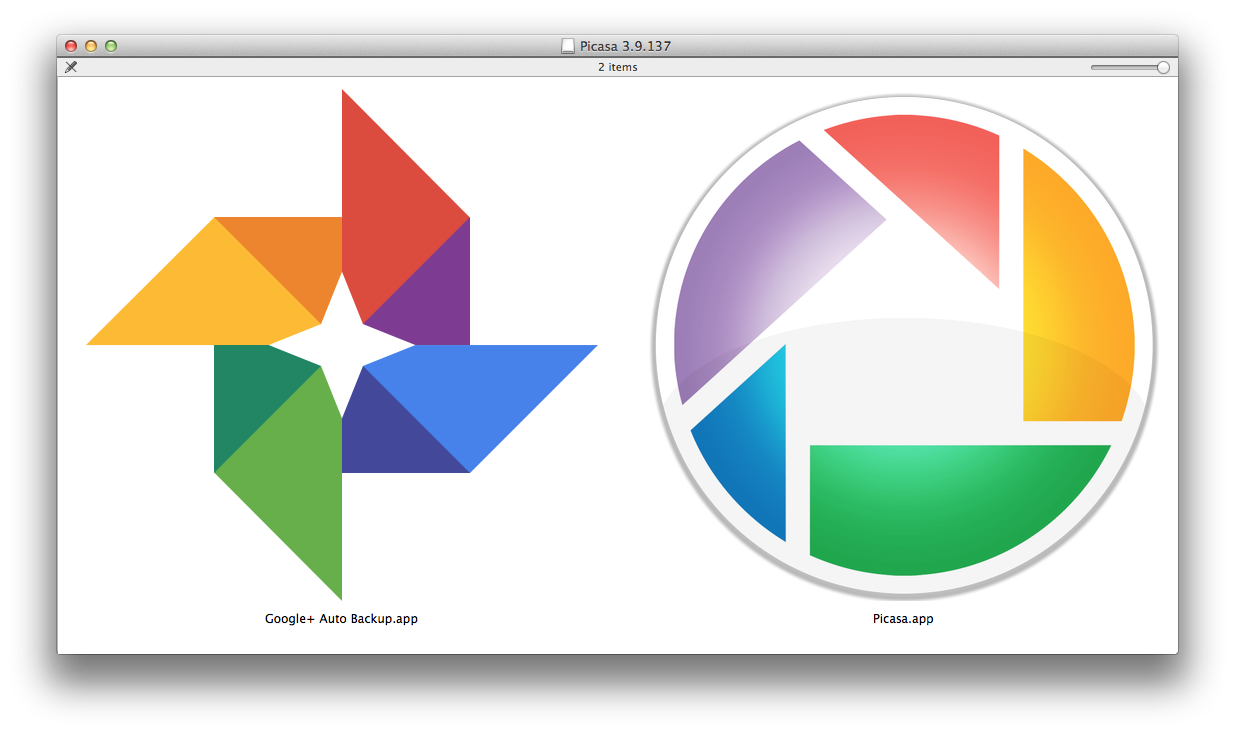 Google has been offering its standalone Picasa Mac app for years and while it may lack ease of use and elegance of Apple’s own iPhoto and Aperture software, by no means is it a slouch.

Matter of fact, I’ve been using the program for years as my primary point of entry for sorting, geotagging and organizing images in folders prior to importing them to Aperture for advanced touch ups and album management.

But aside from maintenance updates, Picasa for Mac spent much of 2013 unchanged in terms of features, so much so that I began to suspect that Google could perhaps discontinue it in order to make room for a standalone Google+ Photos app for the Mac.

Instead, yesterday’s update has proven there’s still life left in Picasa. In addition to a few new features and complementary fixes, the improved Picasa also brings out a brand new standalone tool allowing you to synchronize a batch of photos and videos residing on your Mac with Google+ Photos…

It’s worth mentioning that Picasa for Mac has had for years a built-in feature where you sign in with your Google Account to have your albums synchronized with Picasa Web Albums, the search giant’s defunct photo sharing service that now now redirects to Google+ Photos.

There also used to be an iPhoto plugin from Google to upload your images to Picasa Web Albums. That said, the Google+ Auto Backup tool is designed to work exclusively with Google+ Photos, as evidenced by its icon which uses the new Google+ Photos icon.

As first noted by the Google Operating System blog, the app sites in the background and automatically synchronizes watched folders with the Google+ Photos service, much like Google’s other desktop syncing utilities like Google Music Manager and Google Drive.

Your uploaded photos are made private on Google+ Photos, but you can share them later with your contacts or the web at large using the Google+ Photos interface on the web or through the free Google+ iOS app. 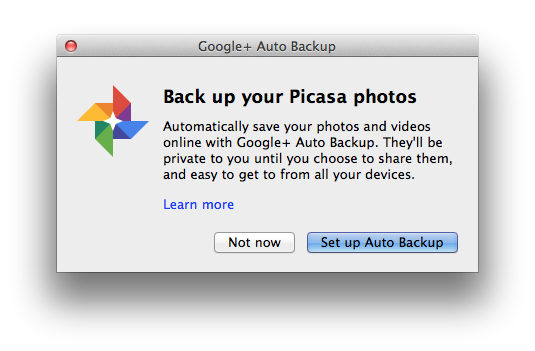 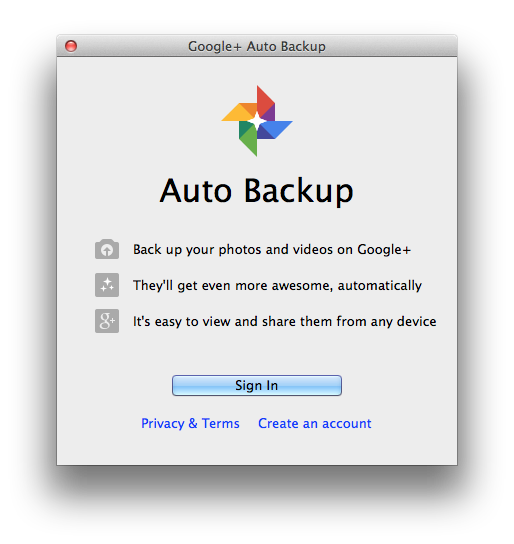 Next, check or uncheck your photo sources or add any folder on your system to the watched folders list for photos and videos. The good thing about this step is that Google automatically calculates the size of your backup.

You’ll need to decided whether to have your high-resolution shots downscaled to 2,048 pixels horizontally by Google+ Photos – in which case the uploads don’t count against your Google storage quota – or go full res. The app defaults to synchronizing your images in full resolution so those uploads will count against your Google storage (shared between Google+ Photos, Gmail and Drive). 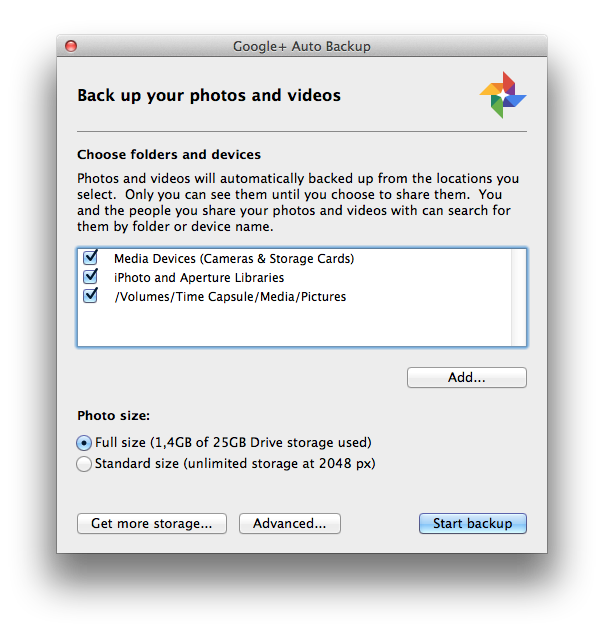 Hitting the Advanced button reveals more options: as you an see, Google+ Auto Backup even has support for SD cards. 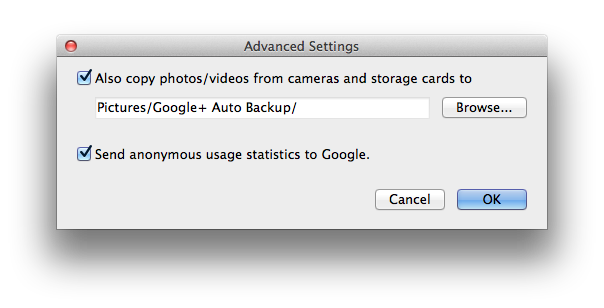 Once your photos and videos are backed up and available on the Google+ Photos service, visiting your Google+ profile will yield the below message informing you that you can use the search box to find photos and videos from Auto Backup by searching #desktop (or folder names) in Photos Search.

Google arranges your images by date in the Highlights section of Google+ Photos.

This support document confirms that your photos are uploaded private:

All photos uploaded through Google+ Auto Backup will default to private in Google+, so you can decide what actions to take once they are backed up to Google+. Once your photos have been uploaded, they will appear along with other Auto Backup photos.

Strangely enough, you’ll need to install Picasa for Mac in order to get the Google+ Auto Backup app.

Speaking of Picasa, the current version 3.9.137.127 contains several changes, including a new file size limits for uploads (50 megabytes or up to hundred megapixels per image) improved support for RAW and latest cameras and more.

Fans of Picasa’s Edit in Creative Kit, tough luck: this function has been removed. 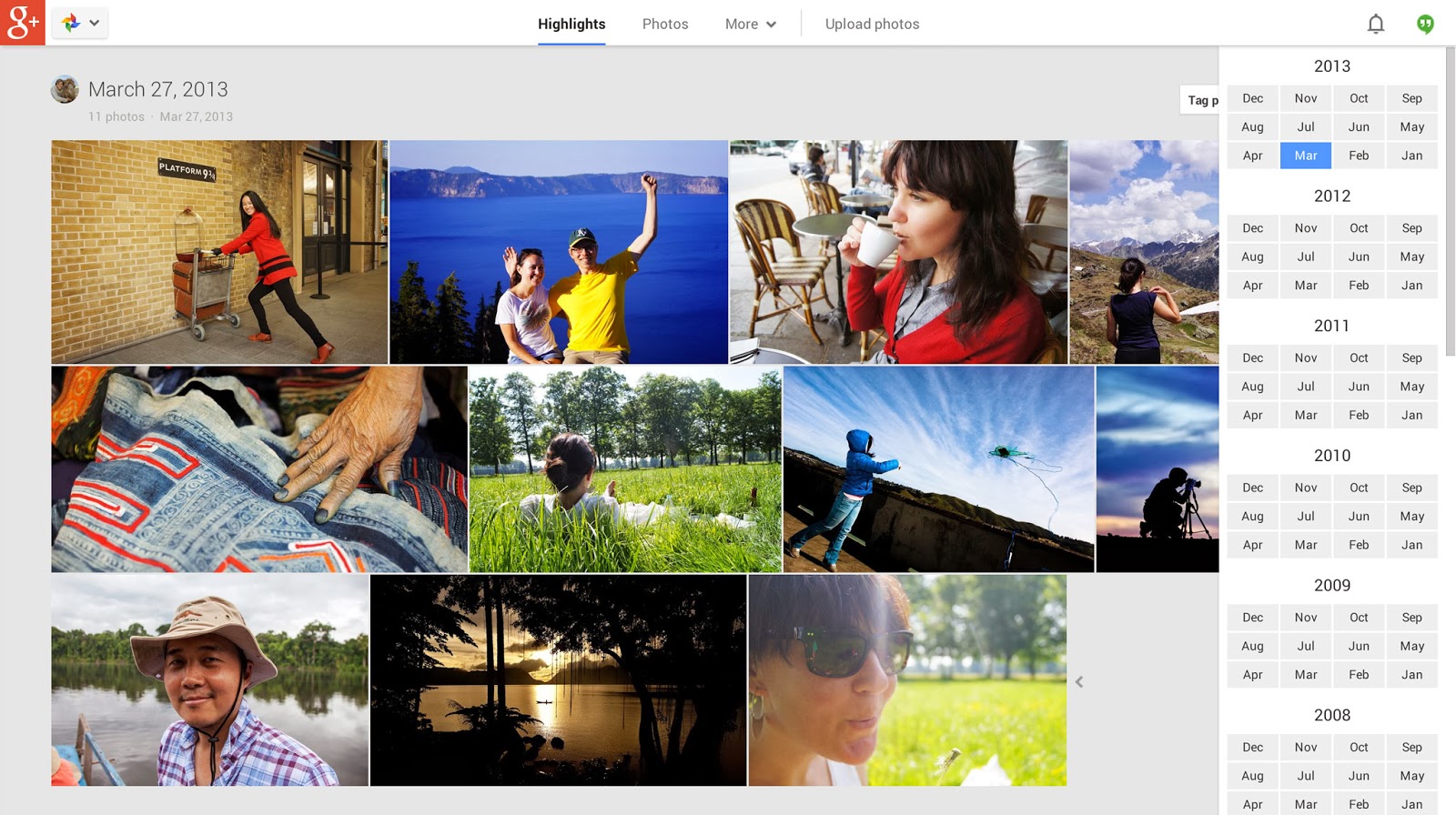 I’m loving Google+ Photos quite a lot, especially now that Google’s been adding a bunch of nice features lately.

That said, serious photography addicts with multi-gigabyte photo libraries are probably better off storing their projects on Yahoo’s Flickr, a long-standing photo sharing service that gives you one terabyte of free storage for photos versus just fifteen gigabytes of free Google storage.

Google+ Auto Backup is part of the latest version of Picasa for Windows and Mac.