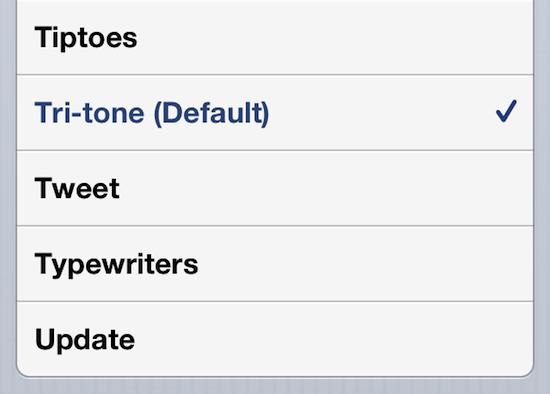 The iPhone is such an iconic handset that a number of its features are instantly recognizable. The app-laden Home screen, the single Home button below the touch screen. Heck, even the sounds—how many of you check your phone when you hear the Tri-tone alert?

Well as it turns out, there’s actually an interesting story behind that chime, which dates all the way back to 1998. It actually started as the sound to alert a user when a CD burning session was complete in an app called SoundJam, which was later acquired by Apple…

TUAW points to the tale from long-time Apple software engineer Kelly Jacklin, who was working on an MP3 player for the Mac called SoundJam MP with fellow developers Jeff Robbin and Bill Kincaid when the need for a simple ‘burning session complete’ alert arose.

“I was looking for something “simple” that would grab the user’s attention. I thought a simple sequence of notes, played with a clean-sounding instrument, would cut through the clutter of noise in a home or office. So I had two tasks: pick an instrument, and pick a sequence of notes. Simple, right? Yeah, says you; everyone’s an armchair musician…

I was really into the sound of marimbas and kalimbas at the time, so I thought I’d try both of those. I also went through bank (after bank) of sounds built into the SW1000XG, auditioning instrument sounds, and found three other instrument sounds that I liked: a harp, a koto (Japanese zither), and a pizzicato string sound (that’s the sound a violinist makes when plucking the string, rather than bowing it).”

Interestingly enough, Apple went on to purchase SoundJam in early 2000 as part of an effort to build a suitable MP3 player for its desktop. The team’s app development continued in Cupertino, where it eventually evolved into iTunes, which launched Apple launched in 2001.

“So imagine my surprise when the iPhone ships, and the default text message tone is… “158-marimba”, now going by the clever (and not actually accurate, from a music theory perspective) name “Tri-Tone”. Time goes by, and this sound becomes iconic, showing up in TV shows and movies, and becoming international short-hand for “you have a text message”… Wow! Who’d have thought?”

The entire article is worth reading, so check it out if you get the chance. Another cool little side note is that, according to their LinkedIn profiles and Wikipedia, all of these guys still work at Apple.