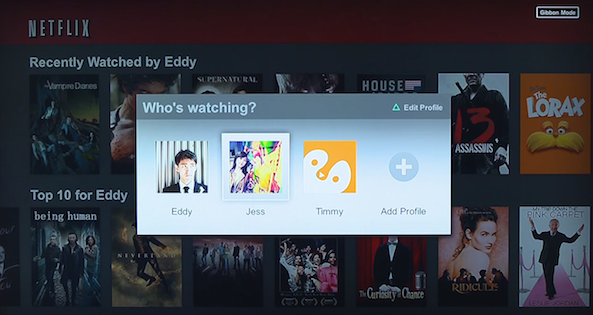 Netflix users should keep an eye on their iOS devices this weekend. The streaming service has officially launched its new Profiles feature, and says it will be rolling it out to iPhones, iPads and Apple TVs (and other devices) over the next few days.

The news comes after several users, who had been given access to Profiles early, reported that the feature was showing up in the Netflix app of their Apple TVs. Now it looks like everyone is going to be able to get in on the fun in the near future…

Here’s the announcement from Netflix’s blog:

“Honey, you ruined my Netflix!”

That’s an exclamation by a recently married Netflix member after his wife moved in with him, overheard during one of our many meetings with customers.

I’m sure many of you have had similar experiences, where you sat down to find something great to watch on Netflix, but it looks like your spouse has been binging on those teenage supernatural dramas you can’t stand, or your kids have filled your viewing history with animated sheep.

Today, we are launching a new feature on Netflix that solves that problem and makes it even easier to find something that you will enjoy. You will be able to add additional profiles (up to 5) for each member of your household that uses Netflix. Each person will get personalized suggestions based on what they watch and rate, as well as separate Recently Watched and Instant Queue lists. You can also connect each person to a different Facebook account, to get personalized suggestions from your friends. “

Netflix says that for now, you can only add more profiles from the website or on the PS3, but you can select a profile on any of the devices listed above. Regardless, it’s a great feature and should come in handy for folks who share Netflix accounts.

If you’re not seeing it yet, don’t worry. I’ve looked on both my iPad and Apple TV, and my account obviously hasn’t been pushed the feature yet—I even tried logging out and logging back in to no avail. Netflix says the rollout could take a few days.

Are you seeing the new Profiles feature yet?