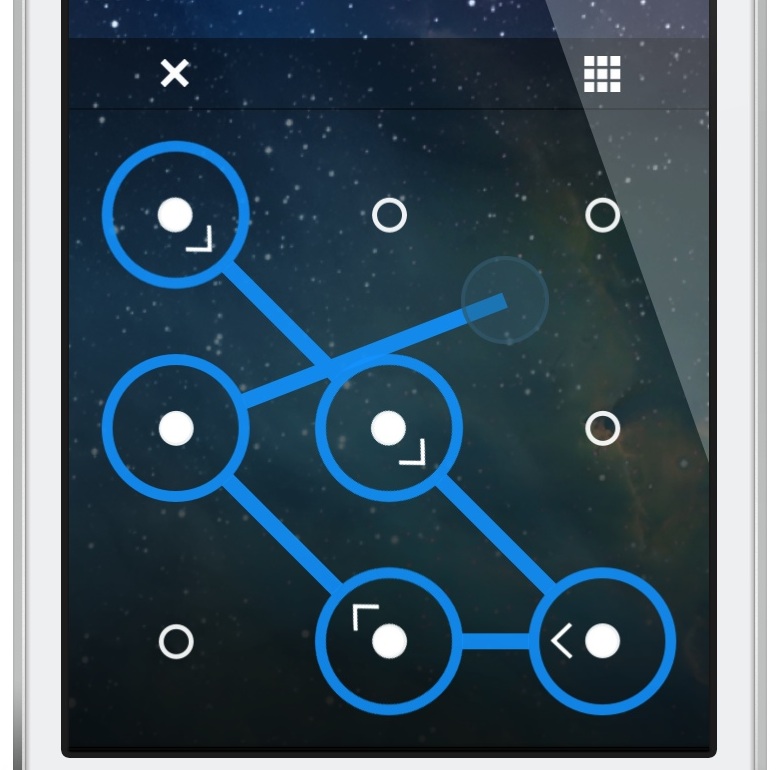 PatternUnlock isn’t the first jailbreak tweak to hit Cydia that features an Android-like pattern unlock pattern, but it is, perhaps, the best. Other jailbreak tweaks like AndroidLockXT can lay claim to being the first, and some may prefer the vast amount of options offered with that tweak.

I prefer PatternUnlock, however, because of its ease of use, design, and impeccable documentation. It’s a tweak that plays nice with stock iOS, and compliments the standard experience instead of making it feel obtuse and disjointed. Take a look inside as I go hands-on with PatternUnlock on video.

Just like the stock iOS passcode, you can require the patten to be entered immediately upon unlock, or set an interval based delay ranging from 1, 2, 5, or 15 minutes, or 1, 2, or 4 hours. For those of you who wish to involve haptic feedback on the Lock screen, then you’ll be happy to find a vibrations section in PatternUnlock’s preferences. Here you can set vibration to happen when touching a point, or on a successful unlock. There are also two different sliders for each section dedicated to adjusting the vibration duration and intensity. 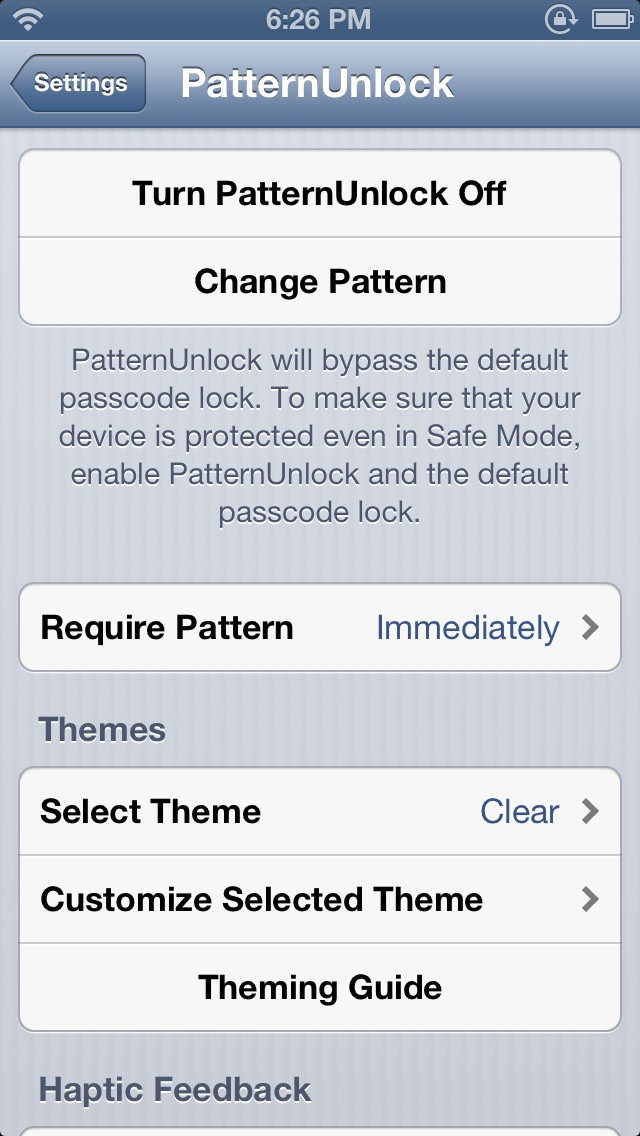 A few additional supplementary features are included with PatternUnlock’s settings. You’ll find the ability to enable an option bar for accessing the emergency call button (iPhone’s only), and a setting to enable the device’s block mode when too many incorrect unlock attempts are made. 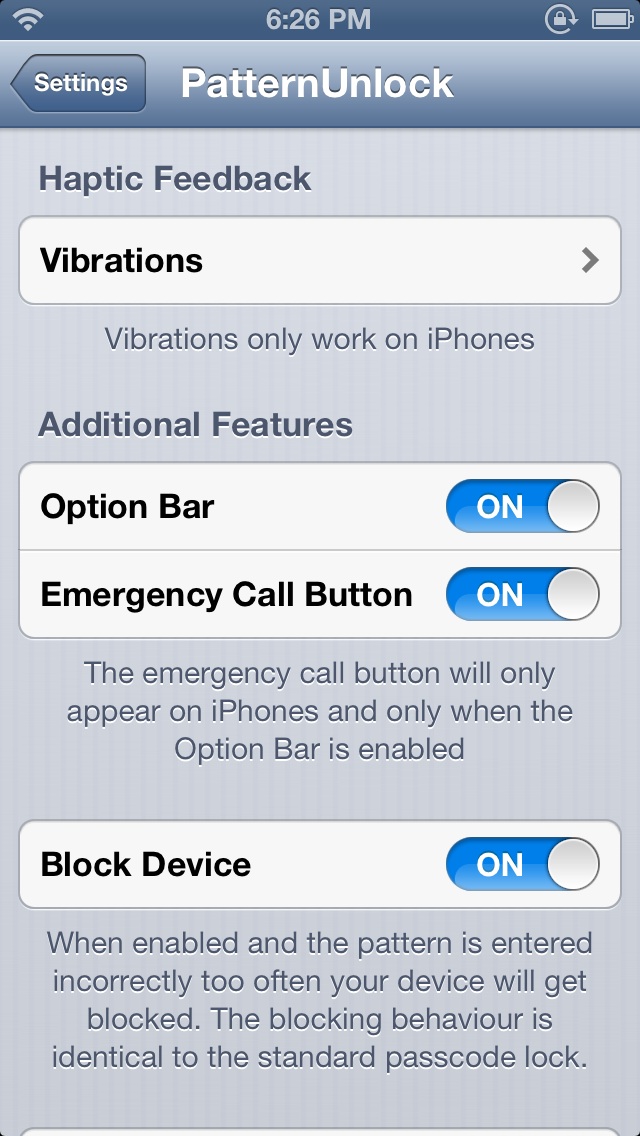 PatternUnlock comes bundled with five different themes, and includes detailed documentation on how to develop your own themes. I found that the themes in PatternUnlock were designed in a way that truly compliments the iOS Lock screen. In my opinion, AndroidLockXT, while a good tweak, doesn’t fit in with iOS the way PatternUnlock does from a design perspective. AndroidLockXT’s stock themes seem too Android-ish for iOS, whereas PatternUnlock doesn’t seem to force the issue. Of course, there are a plethora of 3rd party themes available for AndroidLockXT, so that’s something that you need to consider.

When it comes to options, that’s where AndroidLockXT is simply more robust. PatternUnlock features options, but they are all tightly involved with the basic functionality of the tweak. AndroidLockXT goes the extra mile with all sorts of additional goodies, such as the ability to remain unlocked while on a specific Wi-Fi network. 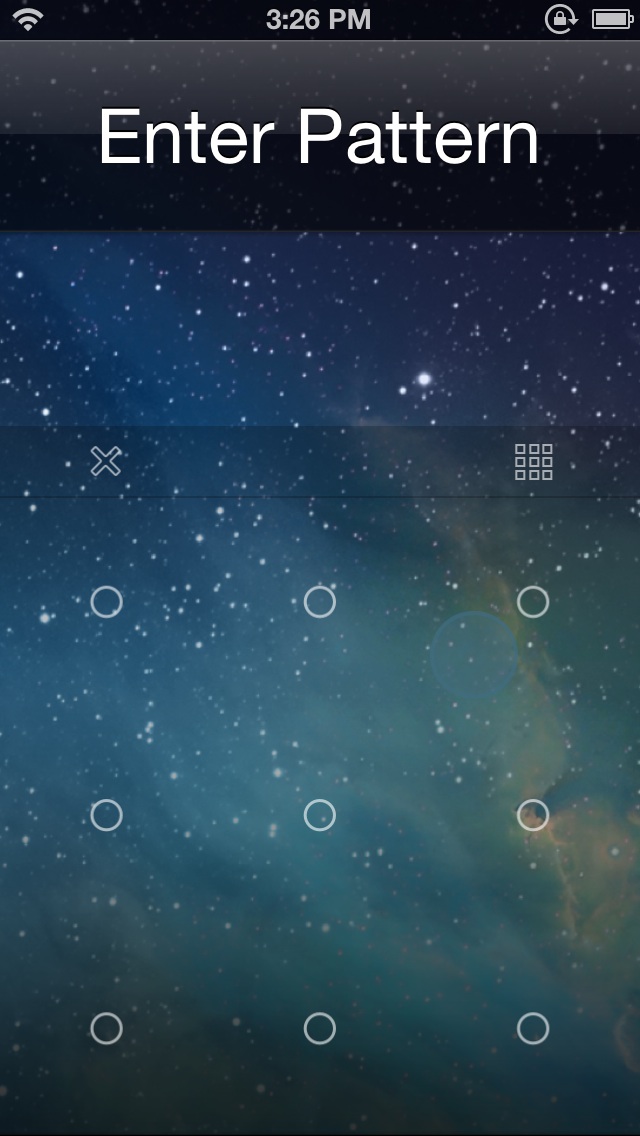 Those extras are nice and all, but once again, PatternUnlock gets the basic stuff right. For instance, the way that PatternUnlock works together with stock passcodes shows a lot of forethought on the part of developer, Jonas Gessner. While on the Lock screen, PatternUnlock includes a button in the upper-right hand corner that allows you to switch to traditional passcode mode. This lets you use both forms of security interchangeably, and also ensures that your device won’t be compromised in the event that the tweak is disabled or uninstalled.

I also need to mention that way that the lines of the patterns “snap” into place. This snapping feature makes it much easier to enter complex patterns using PatternUnlock when compared to the competition. PatternUnlock is more forgiving when it comes to unlocking your device, and this makes using it less tedious. This feature shouldn’t be understated. Watch the video for a visual description of what I mean.

If you’re looking for an alternative to the stock passcode unlock in iOS, then look no further than PatternUnlock. To me, it’s the best pattern unlocking alternative present on Cydia, and it’s well worth the $1.99 asking price. I believe that AndroidLockXT is a good choice as well, but if I had to select between the two, PatternUnlock would be my choice for the reasons mentioned above. What do you think? Share your thoughts in the comment section below.