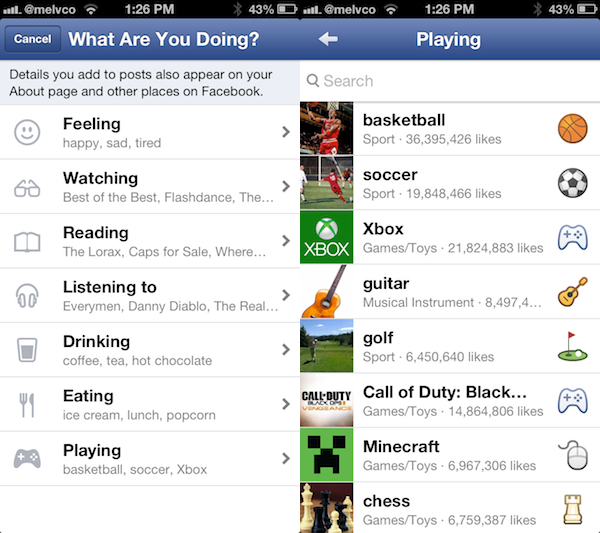 Facebook has updated its iOS app this afternoon with a handful of new features and other improvements. The new version, which the social network identifies as 6.2, adds the ability to add icons to your status updates, and several UI enhancements to make sharing easier. As usual, we have the full change log after the fold…

• Add icons to status updates to show what you’re feeling, reading, watching and more (English only)
• Easily change who can see something you’ve shared
• Start a new conversation with photos you receive in messages
• Bug fixes

The ‘icons’ it mentions are really just emoticons, but there are a wide range of them to choose from. For example, if you’re playing Xbox or basketball, instead of typing that, you can simply select the corresponding emoticon from the list. It’s actually kind of handy, and sure to help spruce up your otherwise boring status updates.

In addition to this feature, Facebook has also made it easier to change who can see something you’ve shared. Lets say you share something better suited for your college buddies, rather than your aunt Martha, changing who can view the post is now just a two tap process. Also, the usual bug fixes and UI improvements are here.

As always, you can find the latest version of Facebook in the App Store, for both the iPhone and iPad, for free.