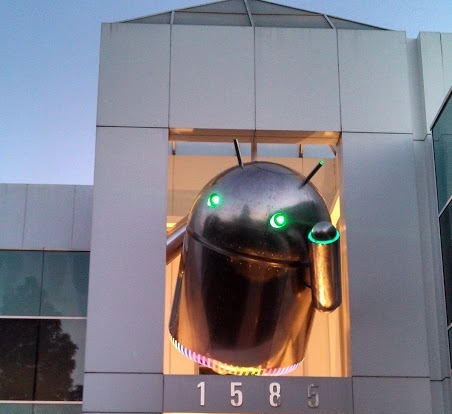 Much has been said about Google’s openness with Android, the mobile operating system the Internet giant gives away free of charge in the hope of spurring the ecosystem of devices with access to its many services.

But Google’s rivals are now complaining to Europe that the search monster is using Android as a Trojan Horse of sorts to lock out competing services on mobile devices.

How? By contractually demanding that vendors who want Google Maps or YouTube or the Google Play store also preload its many other services. Such an approach to openness “uses deceptive conduct to lockout competition in mobile,” rivals argue…

The New York Times reports that the 17-member anti-Google coalition, which calls itself Fairsearch Europe, includes the Windows maker Microsoft and its handset partner Nokia, database vendor Oracle, the TripAdvisor and Expedia services and others.

For example, phone makers that agree to use Android – and that also want Google applications like YouTube – face contractual requirements to place those applications and other Google-branded applications in prominent positions on the mobile device’s desktop, Mr. Vinje said.

Google is using its Android mobile operating system as a ‘Trojan Horse’ to deceive partners, monopolize the mobile marketplace, and control consumer data.

We are asking the Commission to move quickly and decisively to protect competition and innovation in this critical market.

Pulling out all the stops, a media release mentions “Google’s predatory distribution of Android at below-cost” which makes it “difficult for other providers of operating systems to recoup investments in competing with Google’s dominant mobile platform.”

The Commission has been probing Google’s abuse of its dominance of Internet search for two years now and its antitrust chief Joaquín Almunia confirmed officials had been examining the Android operating system independently of the Google search antitrust probe.

Mr. Almunia also said that he was receiving proposals this week from Google to clear up concerns about its search practices, and that he hoped they would make it easier for Internet users to identify when Google was promoting its own services rather than those of competitors who might offer better results.

I find it interesting that Google recently tweaked how it tracks Android versions. Previously, the company would register each device that hits Google servers, a practice that boosted activation numbers. But beginning in April, the company changed the algorithm and now counts only the devices which actually access the Play Store.

This means that forked Android devices such as Amazon’s Kindle tablet series or a bunch of no-name low-end Android handsets from China no longer register as active Android devices because they have their own stores (Amazon) or lack the Play Store (China) altogether.

But as Mike Elgan points out:

One third of all Android tablets are Amazon Kindle Fire devices, and Amazon actively replaces default access of Google’s services to Amazon’s.

Now they’re probably working on a phone, which they will probably subsidize heavily. Usage of Google services on Amazon devices is very low.

A notice on the Android Dashboard page now reads:

Beginning in April, 2013, these charts are now built using data collected from each device when the user visits the Google Play Store.

Previously, the data was collected when the device simply checked-in to Google servers. We believe the new data more accurately reflects those users who are most engaged in the Android and Google Play ecosystem. 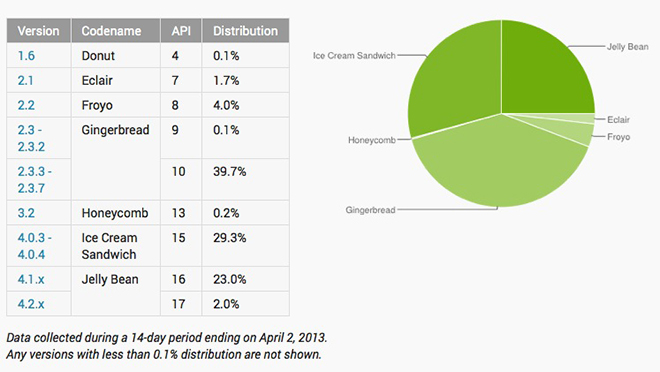 As a result of the new algorithm, over half of Android devices now register as running a pre 4.x Android version -mostly 2.3 Gingerbread that was released on December 6, 2010.