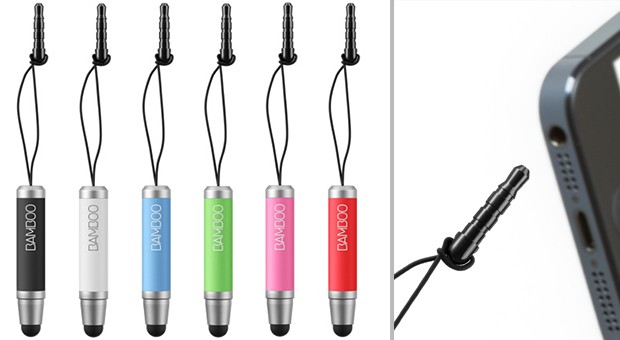 Who holds the title for the best iPad stylus is still up for debate. There are dozens to choose from, and it seems like everyone has their favorites. But there are a few frontrunners in the pack, and one of them is Wacom’s Bamboo Stylus.

The Verge says the Bamboo is “the best stylus you can buy for your iPad,” and FiftyThree, the creators of paper, endorse it on their website. And today, Wacom has released a new version of the popular stylus: the Bamboo Mini…

Like the original, Wacom’s Bamboo Mini stylus has a brass-plated body. But it’s noticeably thicker than its predecessor, and measuring in at just 1.85-inch, it’s much shorter. It sort of reminds me of a crayon or a stubby charcoal pencil.

In addition to its portability, another feature of the Bamboo Mini is its plastic mini-jack plug that allows you to attach it to the headphone port of your iPhone or iPad. Wacom promises the plug won’t damage the port, even with heavy use.

If you’re interested in the tiny stylus, it should be available for purchase from Wacom’s eStore anytime now, and will hit retailers later this month. It’s $19, which is comparatively pricey for a stylus of its size, but hey it comes in 6 standout colors.

What do you think, does Wacom have another hit on its hands?