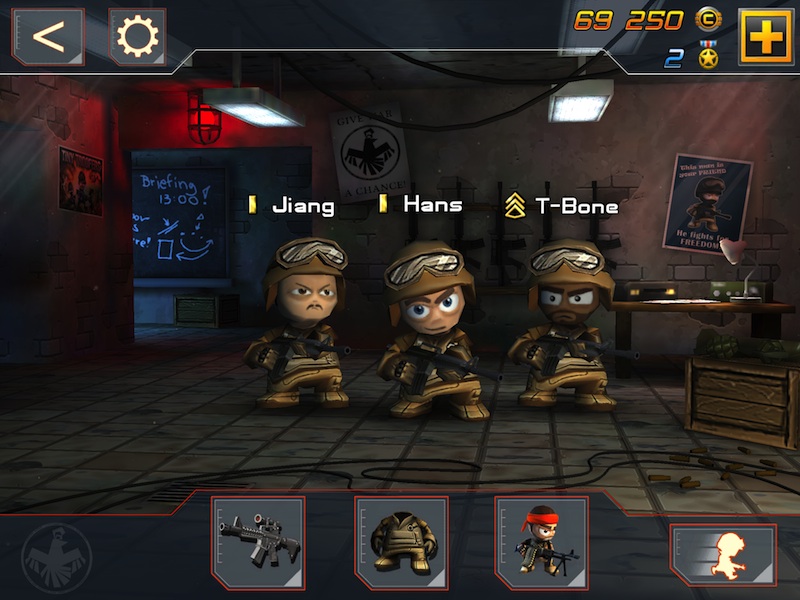 Tiny Troopers made its mark on the App Store in June of 2012. The battle-heavy app mixed team-up gameplay with shoot-em-up action. The minuscule military men are back for more and Tiny Troopers 2: Special Ops is an excellent follow-up to its predecessor.

When I first started playing Tiny Troopers, the one thing that stood out to me the most was the use of military-related catch phrases. Every time a little soldier takes down an enemy, you’ll hear him squeak out a line like, “Hurrah!” or, “Open fire!” It was the thing that drew me in. Those little tough guys are so dang cute.

Tiny Troopers 2 incorporates all of the cuteness of the original while maintaining the manliness you’ve come to expect of war games. You’re not going to be sniping fools a la “Call of Duty,” but you can still get your shooter game action fix…

The Tiny Trooper franchise theme is cute but tough. The bigheaded little fighters have all the taglines you’d hear in an episode of “Generation Kill,” (sans the cussing), but they talk like chipmunks that have been smoking for 40 years.

The menu screen looks like a military map. Players choose a mission from three different operations. Each mission has a main objective and a bonus objective. You can select your level of difficulty from easy, normal, or hard. New missions cannot be played until earlier ones have been successfully completed. There are three operations, each with eight missions. New missions are increasingly more difficult than the last.

Once you get on the battlefield, the game’s theme gets a little cartoony. The graphics are decent. We’re not talking about console-quality gaming, but it is about as detailed as a Wii Sports game would be. 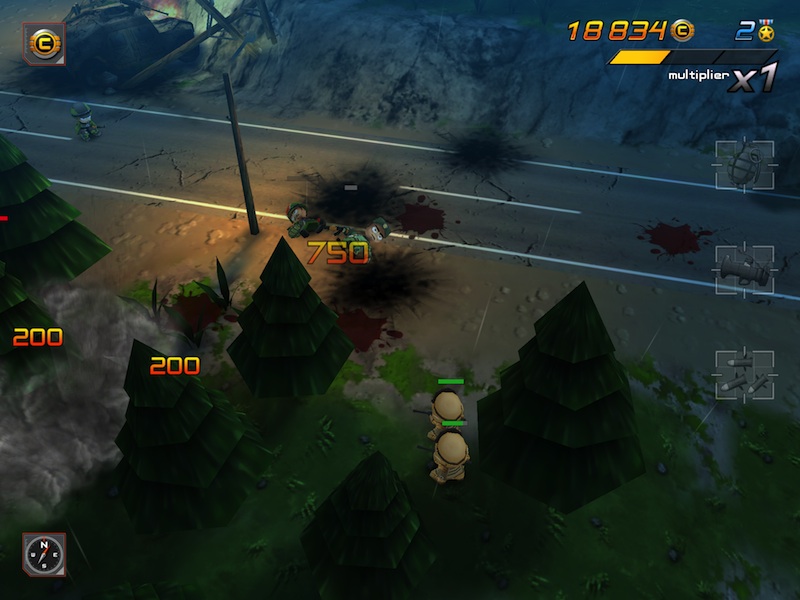 To shoot at enemies, tap the screen on the target of your choice. The soldiers will automatically fire at will. If you have special weapons, like a grenade or missile, you can fire on the enemy by dragging the selected weapon to your target. Special weapons are better used for blowing up buildings and tanks.

As you travel down paths, you’ll be killing enemies and destroying buildings. But, you’ll also be collecting intel, medals, dog tags, special weapons, and power ups, like speed boosts. Everything you find in battle adds more points to your final score. You will earn additional command points for finding all of the level’s medals and dog tags.

Special weapons can be found on the battlefield, but you can also purchase them from the pause menu at any time. You can also buy health packs, speed boosts, and additional soldiers if you lose any during the mission.

Players collect command points and medals that can be used to purchase these items. They can also be used to upgrade the soldiers’ main guns, buy special uniforms that offer bonuses, like additional hit points or automatic command points.

Once you’ve beaten the first level in normal mode, you’ll unlock the “Zombie Dawn of the Dead” survival mode level. In the Zombie mode, your only mission is to survive wave after wave of undead hordes. You will collect massive amounts of command points if you survive long enough to earn them. 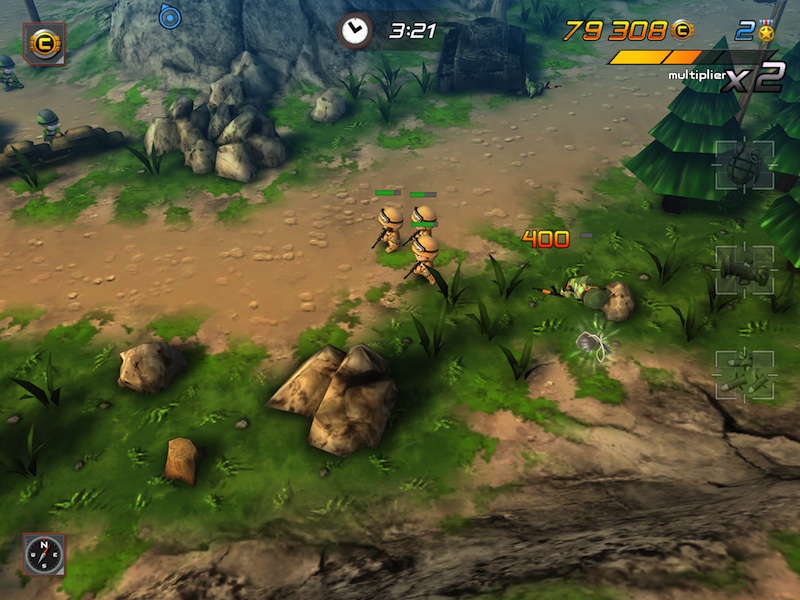 Tiny Troopers 2 costs only $0.99 to download, which is about the best value for a universal game you can get. There are a lot of items you can buy with in-app purchases, like additional medals, and specialist unlock packages. However, you don’t need any of the in-app purchases in order to enjoy the game. The only time you might end up adding money to the game is if you revive your soldiers after a mission.

The replay value isn’t very high since each level is exactly the same when you play it. Even when you play it with a higher difficulty mode, the collectible items are all in the same place. The enemies are just stronger.

Tiny Troopers 2 is just as fun to play as its predecessor. The missions are exciting and challenging. You can increase your difficulty level if you find the game to be too easy. The upgrades and special weapons will make you try harder to find all of the collectible items in each mission. You may find yourself buying more goodies with the IAPs, but you can make it through all three operations without having to spend a penny more than the original download price of $0.99.

If you are a fan of team-up style shoot-em-up war games, this is going to make you very happy. If you’ve already mastered Tiny Troopers, this will be like a familiar song with a new skin.