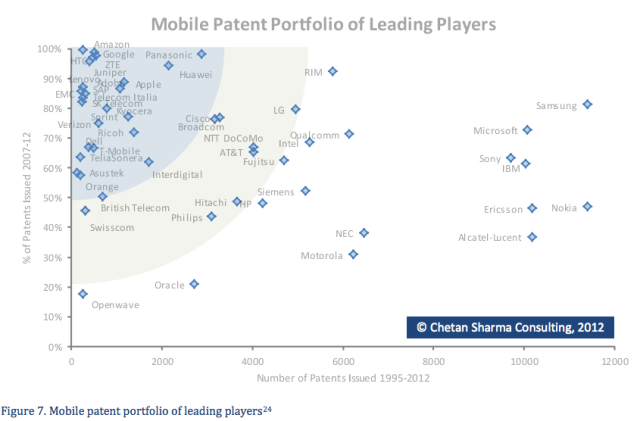 For some time, patents have been viewed as the latest competitive weapon. A company can still lose in terms of product sales, but reap a tidy sum through patent litigation and licensing. Samsung, the South Korean firm which makes everything from silicon chips to cell phones, now has the world’s largest collection of patents, topping rival iPhone maker Apple.

Thanks to its rise as a mobile powerhouse, Samsung topped the list both in overall mobile patents held and patents granted in 2012. By comparison, Apple ranked No. 7 in mobile patents involving infrastructure and platforms, according to a new analysis of the fast-changing mobile patent landscape…

TechCrunch relays mobile analyst Chetan Sharma data which claims seven million mobile patents were granted in the U.S. and Europe during 2012. Samsung’s rise came at the expense of Nokia , the previous patent leader.

Although Samsung and Nokia are both companies producing a wide range of products, the rise of mobile patents came as Apple and Samsung dominated the smartphone market.

This is a marked turnaround from the previous year, when Apple found its vast array of patents vital to fending off Samsung’s growth in Europe, as well as the United States.

In 2012, the California company won a patent-infringement lawsuit against Samsung, potentially requiring the South Korean firm to pay at least $1 billion. 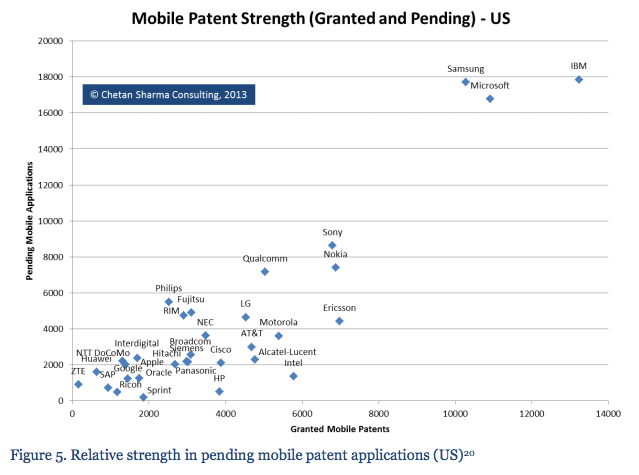 Samsung likely will remain near the top of the mobile patent rankings in the future, according to the research. Patent applications rose 61 percent in 2012 over the prior decade. according to Sharma. While IBM continues to lead the list, Samsung and Microsoft are not far behind.

Other trends suggest nations outside the U.S. may be the future hotbeds for mobile patents. While mobile technology R&D has shifted from Europe to the U.S., growing to 25 percent of all patents granted in America during 2013 (from 5 percent in 2001), the spotlight may shift to China.

In 2011, patents coming from China grew at a 22 percent rate – outpacing the 3.3 percent and 3.8 percent growth in the U.S. and Europe, respectively.

As China and other countries increase their patent output, those type of headlines will only mount.