With Apple’s market capitalization having fallen below the $400 billion mark, the first such drop since January 2012, many armchair analysts are observing on Twitter and elsewhere a worrying correlation between stock prices of Apple and its chief rivals Google and Samsung. Looking at the period from Apple’s September 2012 peak, each time Apple went down, Google and Samsung seemingly rose.

And with this weird correspondence between Apple’s lows and Google’s and Samsung’s highs, some analysts are calling the Internet giant “the next Apple”, estimating that Google is on its way to join the $1,000 a share club. What a difference a few months make: one analyst in April 2012 said Apple would become the world’s first $1 trillion company. While Apple’s pain = Google’s gain, luck in the stock market changes quickly…

Check out the graph below.

For reference: Apple shares lost more than half their value since the September 2012 peak. Google shares are up about 30 percent since a mid-November 2012 low.

CNBC first noted back in February a symmetric divergence between Google and Apple’s share price.

Bloomberg’s Scarlet Fu looks at the widening valuation gap between Google and Apple.

Google’s rise is easy to explain: the company is building some serious momentum with the latest e-commerce initiatives, YouTube growth, improving mobile trends and its growing hardware biz.

But it’s not just Google, it’s Samsung, too (via Zach Epstein). 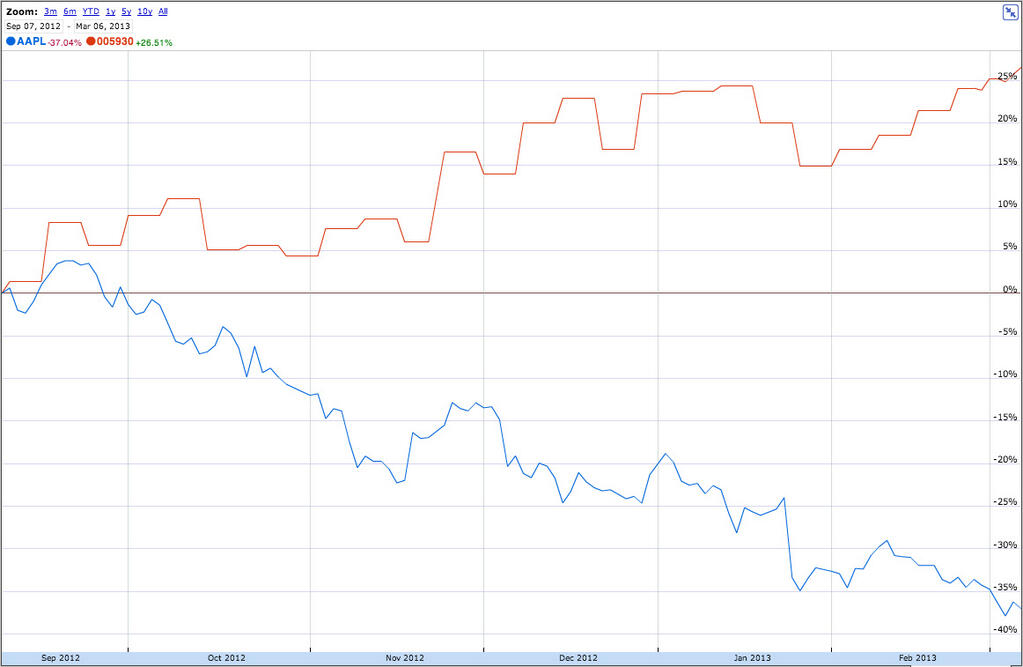 Bloomberg notes that the Apple-Google gap is the widest since June 2005, adding that GOOG is trading at “25 times profit, compared with a price-to- earnings ratio of less than ten for Apple.”

Learning from our Apple experience, the Galaxy S4 launch could be Samsung’s iPhone 5 ‘moment’ – in other words, when the Samsung stock peaks. The S4 should have a better processor (Exynos Octa chip) and improved display (potentially larger/flexible) but how much better can it really be?

Despite Samsung’s many businesses, only one makes real money. 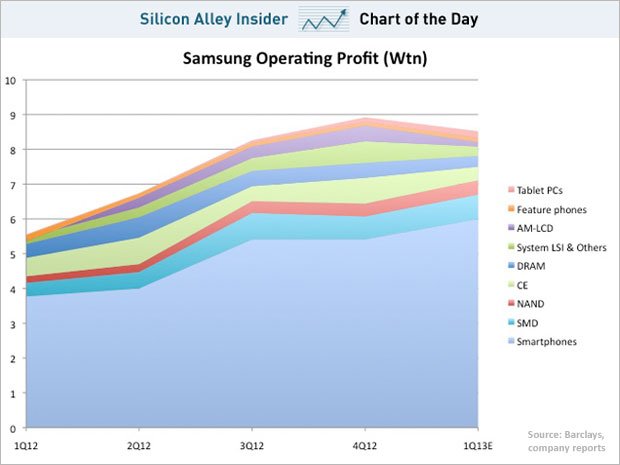 And with Samsung’s high-end phones basically subsidizing its handset operating margins which is in the 20 percent range (Apple: 40 percent or more), Samsung’s margins will suffer as the market trends to the mid and low end.

I guess it’s the circle of life.

Companies grow, reach their peak and then decline, only to grow again.

Apple’s been through this cycle a couple times in its past and no tech company can escape this trend.

Once sales decelerate and margins collapse, spooked investors will punish your stock.

It may not be an optimal system to run the markets and business, but it’s the best we have and no one has come up with a better solution.