Here’s an accessory that looks like something straight out of a James Bond movie, or Minority Report for that matter. A company called Thalmic Labs has just launched a sci-fi gesture control for Mac and Windows PCs via its new armband called MYO. Connecting to your desktop or mobile device via low-power Bluetooth, the $149 gizmo detects the electrical activity produced by your muscles, translating finger and hand movement into user interface interactions, Kinect style.

For example, you could use a circular hand motion to control the volume of iTunes playback, scroll up and down a web page by lifting or lowering your hand, switch between running tasks by swiping to the left and right with two fingers and more. What’s best, the MYO is a standalone accessory in that it doesn’t require a camera to interpret the user’s gestures. The video certainly looks promising…

According to The Next Web, Thalmic Labs is also launching the MYO API today to let programmers write mobile applications that work with the accessory. 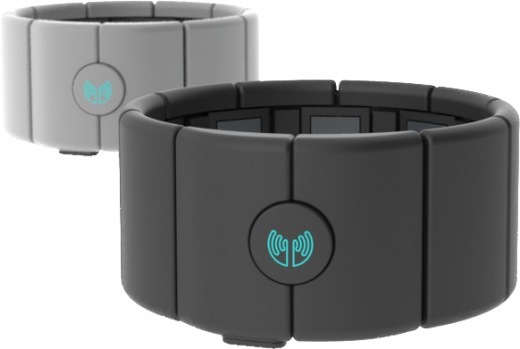 Limited quantities will be available initially and the armband will ship in late 2013.

This thing looks quite interesting.

I like how snapping two fingers invokes the playback control. The promo clip top of post also highlights gesture control of a remotely-operated vehicle. Steve Wozniak was sufficiently impressed with the armband, calling it “very cool and impressive”.

Though Google recently launched a Steve Jobs non-approved touchscreen notebook, the Pixel, Apple’s multitouch implementation on Mac notebooks has traditionally relied on the built-in glass trackpad in order to avoid the arm fatigue associated with interacting with the vertical touch surfaces for prolonged periods of time.

Something like the MYO armband could go a long way toward adding another layer of gesture-based interaction to our devices, bypassing a touchscreen.

Do you think some hand gestures would make sense on the iPhone?

For example, waving your hand over the device to mute the incoming call?