TechCrunch has published a lengthy article today entitled “Behind The Scenes of The iPhone 5 Jailbreak.” The piece takes a look back at all of the jailbreaks that have been released over the years, as well as at the work being done on the current jailbreak.

While the report doesn’t offer any new information regarding the progress of the iOS 6 JB, it does have a couple of interesting tidbits sprinkled throughout its contents. One of them, for example, is the number of devices that are currently running Cydia… 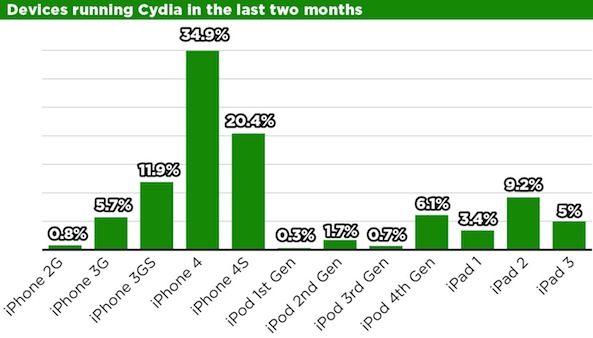 The chart you see above comes from Cydia creator Jay Freeman, better known as Saurik. And it shows the percentage of each device seen running Cydia over the past two months. The total number of iPhones, iPads and iPod touches equates to some 22,780,029.

The breakdown isn’t very surprising. Of course the iPhone 4 would be most popular device, because 1. it’s the latest iPhone model that’s jailbreakable on iOS 6 , and 2. most carriers are offering it for free right now. And the other figures are similarly predictable.

Keep in mind that in between the releases of jailbreaks, Cydia installs tend to trend downwards. And then when a new jailbreak gets released, the number of Cydia installs climb again. Saurik says each time, that number is higher than it was after the previous release.

So needless to say it’ll be interesting to see these numbers in a few months—or whenever it is we see the iOS 6/iPhone 5 jailbreak. It may not even take that long though, as the last we heard, pod2g and planetbeing were making some great strides in their hacking.

Which of your iOS devices are currently jailbroken?