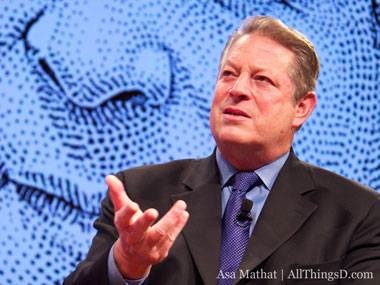 I also have another headline: Al Gore profits from Apple losses. Regardless of where you stand, the debate over whether Apple’s iPhone is facing declining demand has now spread from simply a question of iOS versus Android. It’s about Benjamins, who wins and who loses. Facing the ‘threat’ of Apple share value rebounding when its quarterly sales numbers are released next Wednesday, investors are hoping the company’s stock remains low. Among them: former U.S. Vice President and Apple board member Al Gore.

“That’s a steal even at today’s slightly-deflated-from-peak prices”, remarks The Next Web.

The SEC published the filing today.

Although outrageous, that news has brought the conversation around to how Wall Street gambles with the fate of companies. But instead of wagers, traders use terms like “calls” to indicate bets placed on stock prices. All of which is making some observers call foul, alleging stock manipulation.

“The whole cutbacks narrative is a fig leaf for stock manipulation”, writes one commentator in a story Christian filed earlier today. “Options expiration is the reason for this massive decline”, he charged.

Many of the shares expiring today had a “strike” (expected price) of around $550-$600. Institutions which offered the calls for investors lose money if the price of Apple’s stock rises today.

Here’s how Fortune explained the process in July:

You buy Apple at $606, say, and write a September call exercisable at $640. If Apple doesn’t go up very much the option expires unexercised and you pocket the $15 premium. If it does shoot up you have a $34 capital gain plus the $15.

Another way of looking at was presented in November by the stock analysis site Seeking Alpha:

What kind of money are we talking? Let’s use the more than 60,000 calls with a $600 strike price. If Apple goes to $700 before January 19, then those options have an intrinsic value of:

However, if Apple shares stay depressed through Jan. 19, then rise next week on word of more gangbuster iPhone sales, the companies which sold the calls and bought the shares to cover those calls get the money from the difference and the money for which they sold the stock call.

And everything is going on schedule: Apple’s stock is near $499.

How much you wanna bet come Monday, Apple shares are much higher?