Samsung, the world’s largest maker of both cellphones and smartphones by volume, is gearing up for CES 2013, which runs January 8-11 in Las Vegas. A successor to the Galaxy S III is expected to debut at the show and the South Korean firm has put together a nice teaser suggesting “something new is coming”. There are some indications that Apple may be looking to unveil a seventh-generation iPhone during the first quarter of next year, but no credible evidence of a manufacturing ramp up has surfaced yet…

Reuters speculated the Galaxy S IV may come with “a breakthrough unbreakable screen” which can be folded. Other rumors have pointed to a 13-megapixel camera, a quad-core chip and a five-inch display likely sporting full HD 1,920-by-1,080 pixel resolution at 441 pixels per inch, a big improvement in pixel density from both the Galaxy S III’s 306 ppi and the iPhone 5′s 326 ppi screen.

Note Samsung may want to introduce the S IV at its own event, like it with May’s S III announcement this year. So, where does all of this leave Apple?

The Cupertino company recently started selling unlocked iPhone 5 models in the United States and announced the December roll-out, making good on its self-imposed promise of making the handset available in a hundred countries and across 240 carriers by year’s end.

Apple typically refreshes the iPhone hardware once a year, but strong competition may have forced Tim Cook & Co. to opt for semi-annual updates going forward.

We’ve seen this happening with the iPad 3, which was released in March and then refreshed with faster internals six months later. Also, in spite of naysayers, Apple released the iPad mini in September.

Chinese-language newspaper Commercial Times thinks Apple “has accelerated the certification processes” for related parts and components for the so-called iPhone 5S, a hardware refresh, apparently because low yield rates have affected sales targets for the handset. 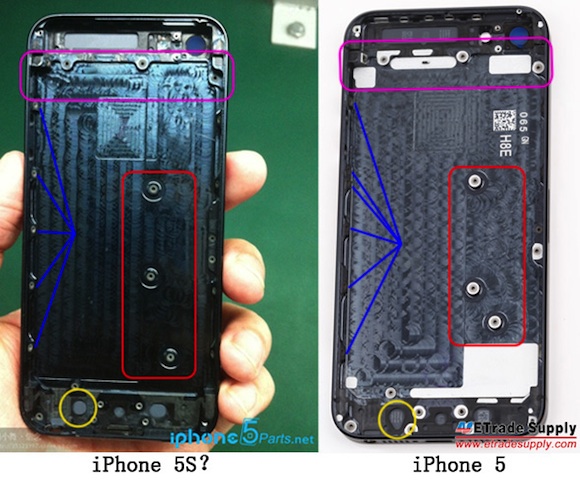 Parts firm ETrade Supply recently leaked a part said to depict an iPhone 5S backplate, suggesting Apple will keep the iPhone 5 form factor and instead update the innards, though that part could easily belong to one of the iPhone 5 prototypes that were floating around in the run-up to the September release.

Is it reasonable to expect a new iPhone just six months after the iPhone 5 hit the market?