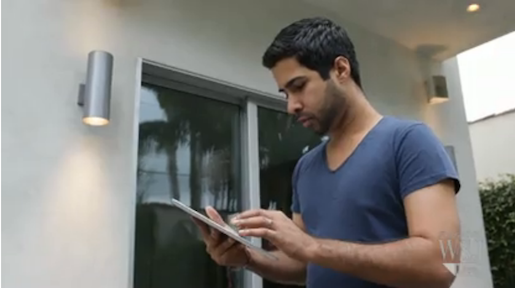 Home automation has been around for decades. But with the recent advent of the smartphone and the tablet, the market has started to evolve much more quickly. Just look at products like the Nest Learning Thermostat and the Philips Hue.

It seems like you can control pretty much anything with your smartphone or tablet these days, and we’ve come across a cool example of that. Check out this video of a house that has $80 grand of iPad-controlled home automation equipment…

The video comes from The Wall Street Journal (via BusinessInsider):

The 2,400-square-foot house is located in West Hollywood, California and belongs to Savan Kotecha. He is a songwriter and vocal producer for Simon Cowell’s popular X Factor TV show, and is a self-proclaimed “Apple freak.”

Kotecha uses home-automation company Crestron’s hardware and complimentary iPad app to control nearly everything in his house, from the shades and lights to his stereo and security cameras. He can also operate his pool from his tablet.

Of course, not everyone can afford an $80k system. But we’re starting to see more and more consumer-level products, like the Hue and the Nest, bring home automation to the masses. And we expect this space to grow exponentially over the next few years.

What do you think of home automation?