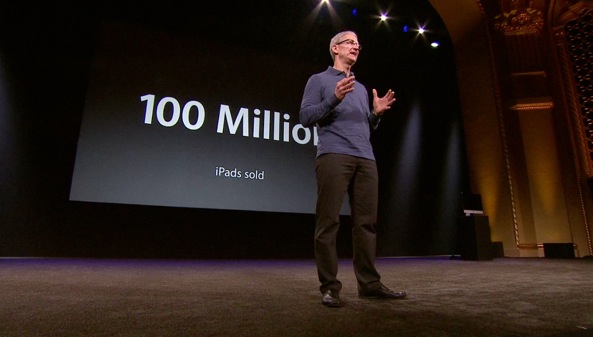 CEO Tim Cook shared an interesting milestone during yesterday’s iPad mini unveiling: Apple two weeks ago sold its hundred millionth iPad. Now, hundred million of anything is enough to give you a pause, but a quick look at Apple’s SEC filings reveals that iPad sales in the September quarter were in fact slowing down. Apple sold a total of 84.12 million iPads when it closed books on the last day of the June quarter.

This means the company since June 30 and through October 9 added about 15.88 million iPads. Don’t forget this includes ten additional days of sales outside the September quarter. The figure certainly doesn’t compare favorably to June quarter’s sales of 17.57 million units. Did Apple release the iPad mini because the iPad was losing its momentum as a portion of would-be shoppers perhaps opted for cheaper tablets from Amazon and Google?

“Today, I’m thrilled to tell you that two weeks ago we sold our one hundred millionth iPad”, Cook said. The milestone caught attention of eagle-eyed Philip Elmer-DeWitt of the Fortune blog (numbers are his life):

Cook’s announcement meant that as of Oct. 9 the company had sold roughly 15.88 million iPads. Ten days earlier, when Apple closed its books on the last quarter of fiscal 2012, the number would have been even lower.

Rather than gaining momentum, as Cook had implied, the iPad was losing it.

The author contacted a bunch of analysts who as a group lowered their iPad estimates an average of 2.67 million units.

“Most also lowered their revenue and earnings estimates, an average of $1.26 billion and $0.31, respectively”, he writes.

He also made this table of before and after numbers. 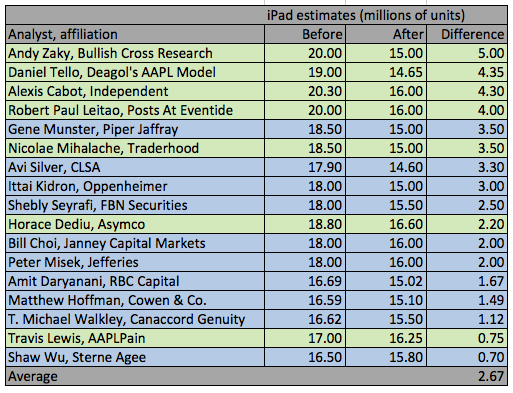 Pro analysts are in blue, the independents are in green

Some factors that may have contributed to a slow down in iPad sales. 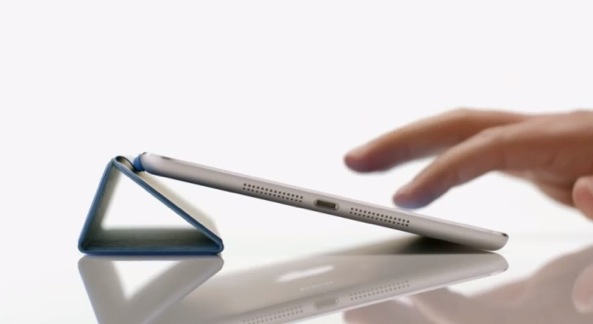 On the other hand, it never makes sense to compare quarters sequentially due to seasonalities: gadget sales peak in Q4 and cool off in Q1. On top of that, Apple has its own release schedule which aligns certain products for back-to-school.

We’ll know for sure about the above estimates when Apple releases its earnings reports after markets close tomorrow.

Assuming iPad sales disappoint, where do we go from here?

As you know, Apple’s sales pitch for the iPad mini can be summed up in this simple assumption: the iPad is a premium experience well worth the extra money. Apple’s bet is that folks are willing to spend a $130 premium to get a $329 iPad mini over a $199 Nexus 7 or Kindle Fire.

But nobody can deny that the Nexus 7 tablet with Jelly Bean software has raised the water line on Google’s platform functionality. These sub-$200 tablets have changed market dynamics and customers are paying notice now.

It’s safe to say Google’s Nexus 7 and Amazon’s Kindle Fire took away sales from Apple. Not all of the prospects were eyeing an iPad of course: someone in the market for a $199 tablet would hardly consider a $399 iPad 2 or a $499 iPad 3.

Regardless of our feelings, truth remains that there will always be people who willingly trade smooth and worry-free user experience for a lower price. Let’s also not forget that many simply cannot afford burning more than two hundred bucks on a tablet computer.

By the way, vote here whether or not you’re planning on buying an iPad mini.

What do you think, are iPad numbers just a temporary glitch as the market re-aligns amidst stronger competition or a sign that the iPad may in fact be losing its momentum?

Should Apple be concerned?