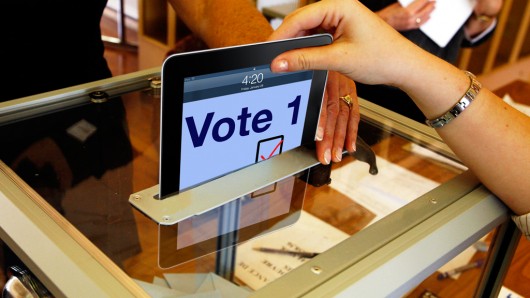 While online voting is not likely to happen in the US nationwide anytime soon, there are some encouraging signs the political process partially has entered the 21st Century. The iPad is replacing the paper and pen when it comes to voter registration in California.

The push for more modernized democratic process seems not to be just puffery, either.

“I do think we’ll have more people registering, particularly eligible voters under 30 who are just used to doing things online. And it makes it easier to ask friends and family to register. All you have to do is e-mail them a link – you don’t have to carry around a pile of forms,” California Secretary of State Debra Bowen told the newspaper.

Of course, California is not the first state to adopt modern technology for the electoral process. In 2011, we told you about voters in Oregon who used iPads to pick a candidate in a special primary election.

University of California San Diego political science professor Thad Kousser said iPad voting solves the problem of young people not turning out to vote simply because it is a hassle to update registration data when you move. In fact, current methods elsewhere which let voters register online but still require people to print out and mail in forms cause a decrease in turnout, according to TechCrunch.

Modernizing the process of voter registration to permit iPads rather than paper forms seems like a no-brainer. There appears to be little chance of campaign fraud with the California model. Only people who already have their signatures on file at the Department of Motor Vehicles can take advantage of the paperless process.

What do you think? The iPad is quickly replacing the home computer, as well as textbooks and is fast becoming the favored second screen for TV viewers. Would you trust an online election process?