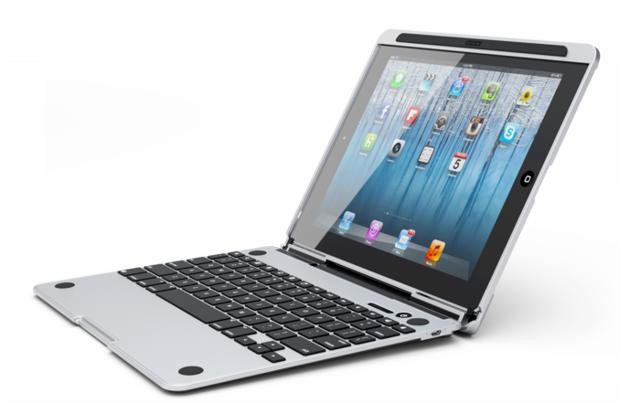 Since Apple unveiled the iPad two years ago, accessory-makers have been trying to find a way to turn it into a laptop hybrid. We’ve covered several of these kinds of products on iDB over the years, including the NoteBookCase and the Brydge.

And this morning, we’re adding another one to the list: the CruxSKUNK. The Crux team promises the case will turn your iPad into a powerful laptop. And, goofy name aside, it actually looks like it could give its competitors a run for their money…

The SKUNK is machined from a single piece of aircraft-grade aluminum — similar to the process Apple uses to machine its MacBooks — and its parts are sandblasted and anodized to match the finish of your iPad. So, pretty high quality stuff.

And the keyboard is also top-notch. It’s full-sized, with a QWERTY layout, and has raised keys for easier typing. It connects to your iPad via Bluetooth, and Crux says that it only needs to be charged once a month via a USB cable.

The developers of the SKUNK are trying to raise $90,000 through Kickstarter to help them start mass producing the accessory. It’s sitting around $50,000 with 40 days to go, so they should have no problem reaching their target.

If you’re interested, $135 gets you on the pre-order list with shipping expected to start this December. That may seem kind of steep compared to other, similar products, but this obviously isn’t your run-of-the-mill keyboard case either.

What do you think of the CruxSKUNK?