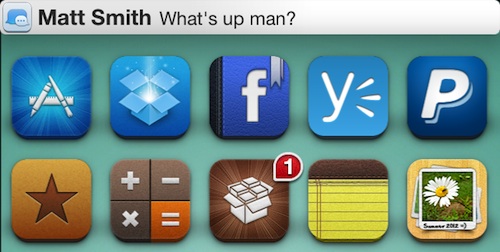 When iOS 5 launched last fall, it brought with it a slew of changes. Among those changes was an all-new notification system, which included a pull-down menu and new banner-style alerts.

Admittedly, the banners are a huge improvement over the popups. But there’s still one problem: they’re too big. And this can sometimes intrude on your work space. Enter DietBulletin…

Ryan Petrich‘s new DietBulletin tweak is a simple utility that shrinks the size of your notification banners to fit in your iPhone’s status bar. This way, the banners are much less intrusive.

If it sounds like you’ve heard this all before, it’s because you have. This tweak is extremely similar to the SmallBanners one we reviewed a few months ago, but with one major difference.

DietBulletin comes with a Settings panel that you can use to customize which apps use the smaller banners. If, for instance, you want your email or text message notifications to be larger so you can read the message previews, you can disable the tweak for those particular applications.

Other than that, there’s not much else to DietBulletin. It works as advertised. If you want to check it out, you’ll need Ryan Petrich’s repo http://rpetri.ch/repo/ installed in Cydia. And it’s free.

What do you think of DietBulletin?