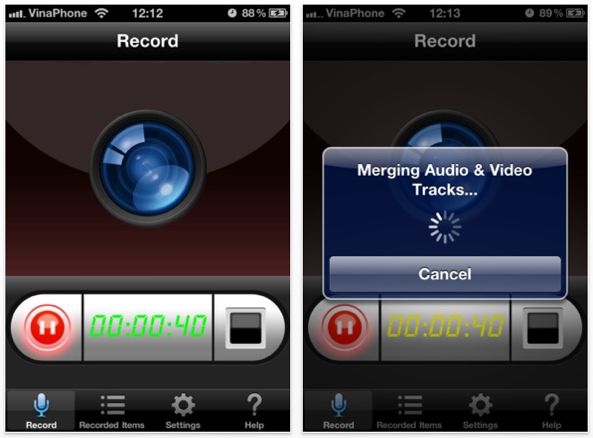 You’ll wanna act on this one right now. Display Recorder, an app by Bugun Software which lets you record your iPhone, iPod touch or iPad screen in real time, has just hit the App Store, priced at two bucks a pop (not to be confused with Ryan Petrich’s app of the same name available for jailbroken devices). If I were you, I’d act now: Apple’s likely to pull Display Recorder at a moment’s notice…

As noted by JBN, the app bests Petrich’s Cydia app in that it can simultaneously record audio from the iPhone’s microphone and merge it with the recorded video.

Secondly, the app records in a format that is instantly available to view on your device unlike the package from Cydia.

It also uses little resources and doesn’t limit you in terms of the video length.

The app is provided as a universal binary that supports both the iPhone and iPad natively. According to iTunes release notes, if you’re having issues capturing screencasts, just change your Region Format in Settings to United States.

We suspect this app somehow escaped the attention of Apple’s eagle-eyed censors so you’re advised to grab it now. As you know, Apple prohibits apps that mimic the native iOS functionality.

It would appear that Display Recorder simply takes screenshots and stitches them together into a clip, though the developer notes that the program utilizes hardware-accelerated video encoding.

Other features include on-device YouTube uploading, adjustable video orientation, quality and audio settings and the ability to export recorded video to your image library.

If you took the lunge, let us know your impressions down in comments.