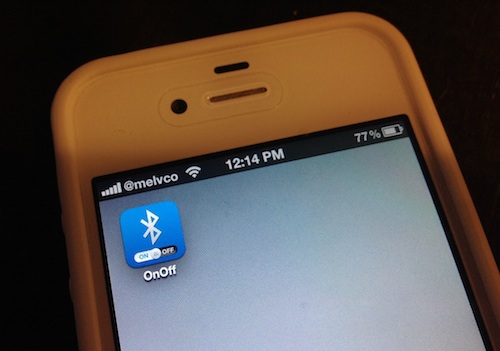 As noted by MacRumors, a new app went live in the App Store yesterday called Bluetooth OnOff. As the name suggests, the software enables you to toggle your iOS device’s bluetooth settings on or off with a single tap.

This is a big deal for a couple of reasons. For one, Apple has a history of denying or removing apps from the App Store that access iOS settings. And two, it makes toggling bluetooth much easier for non-jailbreakers…

UPDATE: As feared, Apple has yanked the app over its use of private APIs.

“Did it take too many steps just to turn on/off bluetooth? You can turn on/off just by launching this app. Just in a second, you can activate or deactivate bluetooth.

*Tip: Turn on the app’s setting if you want to turn [bluetooth] on/off upon launch.”

The app also has a weird chat feature, which allows you to talk over bluetooth with other users within range. But obviously most folks are going to be more interested in the app’s one-touch bluetooth-toggling element.

As of this writing, Bluetooth OnOff is still available. But given Apple’s track record, we don’t know how long that will hold true. If you’re interested in the app, you can download it from the App Store now for $0.99.

What do you think of Bluetooth OnOff?