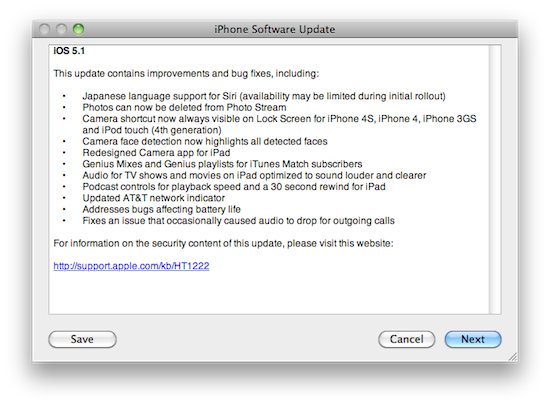 If your iOS device (or devices) is jailbroken, we hope you heeded our warnings not to update to iOS 5.1. As expected, the latest software update for Apple’s mobile OS breaks both the Corona untether and the Absinthe exploit in one fell swoop.

Even though Apple released iOS 5.1 on Wednesday, alongside the announcement of its new iPad, it continued to sign 5.0.1 firmware over the last 48 hours or so. Well, now it looks like that window has closed…

As noted by ModMyi, Apple has stopped signing iOS 5.0.1 for all devices. This means that downgrading your iPhone, iPad or iPod touch from 5.1 to the previous version will now be more difficult, or even impossible, depending on your situation.

Folks with an A4 device that updated to iOS 5.1 can still downgrade back to 5.0.1 if you did the necessary prep-work. Those that have an iPad 2 or iPhone 4S, however, have no way of doing this.

Why is this a big deal? Well there is currently no jailbreak available for iOS 5.1, and we don’t have any idea when one will be available. Users with older (A4) devices can try to jailbreak via RedSn0w, but it’s a tad bit sketchy, and yes, it’s tethered.