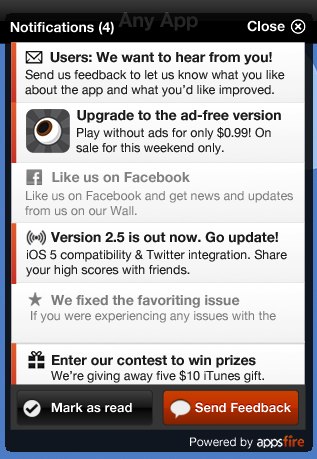 Some of the best ways we keep engaged with our favorite apps is through notifications. Whether it’s an in-app notification or a notification pushed to our homescreen, they help us stay in the loop with what’s going on at the present time.

Sometimes they can be hard to implement for developers, but luckily, there is now a free tool in order to help create in-app notifications for better engagement…

Mobile design company AppsFire, is today launching a new SDK called App Booster, which has been in development for 8 months. App Booster hopes to bring in-app notifications to your apps primarily, but also can provide you with the ability to gain user feedback, analytics, and mobile app cross-promotion.

With in-app notifications, developers can execute an array of messages, including hints for new users, achievements, updates, and more.

Like previously mentioned, App Booster can also allow you to gain feedback from users, where they can post grievances and also give their review of the app. App Booster will then post the review on the iTunes App Store.

For developers, AppsFire makes available a web client where you can track engagement from the users on your app. As TechCrunch reports, in early testing, developers have seen a 50% jump in app engagement and CTRs raise from 15% to 50%.

Most big name apps, like Facebook, have in-app notifications, but in most cases it can be a difficult thing for developers to implement. Luckily, this new SDK hopes to help you with the process. You can download the SDK for free.