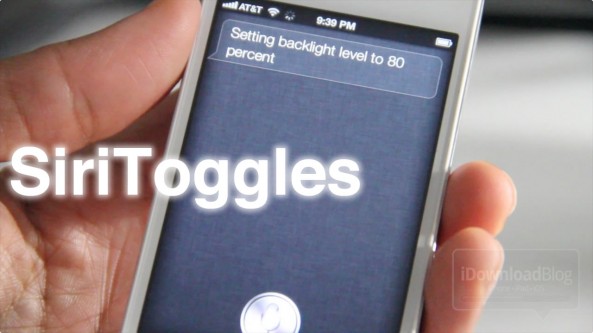 It has barely been a day, and we’ve already seen a plethora of new jailbreak tweaks to take advantage of Siri in new ways. The latest is SiriToggles, and it looks like it could be one of the most promising thus far.

SiriToggles is like SBSettings for voice. You can literally control most of the vital aspects of your iPhone that you normally adjust on a day-to-day basis. Things like brightness, Wi-Fi, 3G, Bluetooth, and more can all be controlled using Siri commands.

Even better, Siri Toggles allows you to launch apps; and when we say launch apps, we mean every app, jailbreak or otherwise. Folks, you do not want to miss our preview of this jailbreak tweak if you’re in possession of an iPhone 4S. This is going to make your lives a whole lot easier…

SiriToggles is a natural extension of the Siri personal assistant, and frankly, we’re disappointed that it took a brilliant jailbreak developer to provide us with functionality that should have been there from the get go.

I’d easily pay money for this tweak, but it’s being distributed for free on Cydia’s BigBoss repo. Developer, Hamza Sood, says it should be appearing on the Cydia store within the next 24 hours.

This is one of the main reasons I’ve wanted an iPhone 4S jailbreak for so long, and now that it’s finally here, and I’m actually able to use it, I can happily report that it’s just as great as we thought it would be when we initially previewed it.

Stay refreshing that Cydia app, folks. It’s coming soon. What do you think?