With the Consumer Electronics Show (CES) taking over Las Vegas this week, we’re expecting to see an onslaught of new iOS-aimed hardware and accessories. A lot of manufacturers use the convention to show off their latest creations.

And it looks like one of those manufacturers will be Blue Microphones, the popular USB Microphone-maker. The company is looking to step outside its scope of professional desktop equipment and venture into iOS gear….

According to The Verge, Blue will be debuting a handful of new microphones at CES this week that are geared toward the portable recording crowd. And the two we are really interested in are the Mikey Digital and the Spark Digital, both of which are compatible with iOS devices.

The Mikey is an external stereo mic that plugs directly into your iDevice’s accessory port. It features both automatic and manual gain control, and has a 3.5mm input. This one will run you just under $100.

The Spark, on the other hand, is a full-size mic. Blue describes it as the world’s first studio-grade condensor microphone to offer both USB and 30-pin dock connectivity. It’s also twice the price of the Mikey, coming in at $199. Yikes. 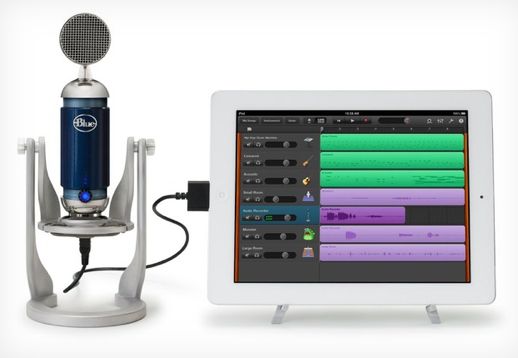 While most folks won’t find themselves lusting after iOS-compatible microphones, those in the business of podcasting or recording might see them as a godsend. Especially since there are tons of professional recording applications that could easily turn your iPad or other iOS device into a recording studio rivaling those costing thousands more.

For more information on these microphones, check out Blue’s website. For more coverage of the latest iOS hardware and accessories from CES, stay tuned to iDB.