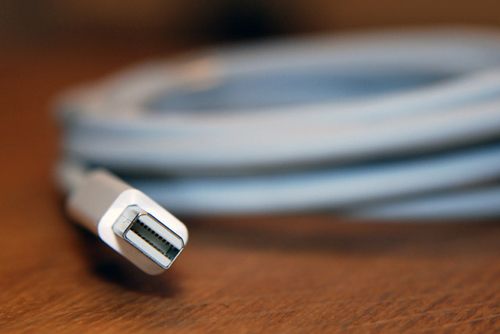 Multiple patent applications by Apple were published by the US Patent and Trademark Office this morning. Three of the inventions revolve around Thunderbolt technology, and one in particular stands out: iOS device support.

Apple introduced Thunderbolt, an I/O platform that transfers data 20x faster than USB 2.0, last year in both its desktop and laptop computer lines. And now it looks like it could be bringing the tech to its popular mobile products…

So what does that mean for the average user? Thunderbolt would allow you to transfer data between your iOS device and computer at breakneck speeds. It would also make for much quicker battery charging.

Of course, all of this would be dependent on whether your computer has a Thunderbolt port or not. And while all of Apple’s 2011 Mac computers have the tech, Windows computers do not. Apple doesn’t typically dabble in technology that hasn’t been widely adopted (see LTE).

Nevertheless, we like the thought of Thunderbolt support in future iOS devices. The current USB cable has been around for ages it seems and its data transfer rates feel archaic in comparison to other technology.